Former heavyweight rivals Evander Holyfield and Mike Tyson could be set to lock horns once again after Holyfield, 58, confirmed his interest in being the latest ageing prizefighter to consider an in-ring return.

Tyson made his return to boxing after a 15-year hiatus in November where he boxed fellow icon Roy Jones Jr. to an eight-round draw as part of Tyson’s upstart ‘Legends Only’ fight league.

What was initially seen by some as little more than a ‘freak show’ fight aimed at stoking fans’ sense of nostalgia turned into one of 2020’s most lucrative pay-per-view events, with some reports stating that it generated around $80 million in revenue – and perhaps sensing his own payday, Holyfield says that he is more than ready to roll up his sleeves.

“People do what they choose to do and for whatever reason they have, they do it,” Holyfield told The Sun.

“The thing is that if it’s meant to be it will happen, either way, it is what it is. What I can tell you is that my team is talking to Mike’s management, so I’m waiting for a decision. They are communicating right now.

“The thing is I’m still training for this, I know it will be some day this deal will happen and I’m ready for him. I’m doing OK.”

Holyfield and Tyson combined for two of the most notorious heavyweight clashes of the 90s. In the first fight in November 1996, underdog Holyfield shocked the boxing community by becoming just the second man to defeat Tyson in the ring when he won by late TKO to inflict his first defeat since his surprise loss to James ‘Buster’ Douglas six years prior.

The rematch, which came the following June, saw Mike Tyson disqualified in the third round for repeatedly biting Holyfield’s ear in what was one of the most controversial events to ever take place in a televised boxing match.

The pair have since reconciled and maintain a friendship to this day – something which Holyfield assesses can be put on hold for one evening at least.

Holyfield caused a frenzy among fight fans last summer when he posted footage to Instagram showing him hitting pads, sparking speculation that he could be the next fighter to defy father time and fight for the first time since his final fight, a 2011 win against Denmark’s Brian Nielsen.

And Holyfield says that his comeback would the real deal.

“My views are you always help people. I try to pass on the goodness that was passed onto me,” he elaborated.

“Where an opportunity is available, I like to make the best out of what I have. I believe if I fought Mike the fight will generate $200 million. It will be the biggest fight there is. That’s the honest truth. I think Mike has my message already. If he is going to do it he is, if not then he’s not.

“It’s a decision he has to make now and we both have to be in an agreement.

“I’m not going to tell anybody what I’m going to do – my strategy I’m planning on using against Mike – I don’t want anyone to know. I’m happy if Mike fights me.” 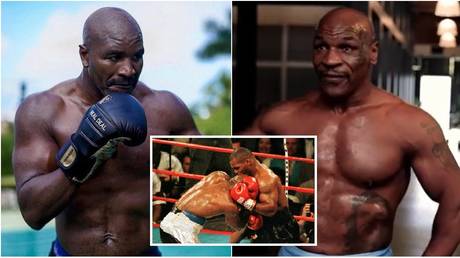