UK Prime Minister Boris Johnson has called on the football authorities to crack down after England players were allegedly subjected to monkey chants during their World Cup qualifier in Hungary.

England earned a 4-0 win at the Puskas Arena in Budapest on Thursday, but the match was marred by claims of racist chanting towards the visiting players.

It is completely unacceptable that @England players were racially abused in Hungary last night.

I urge @FIFAcom to take strong action against those responsible to ensure that this kind of disgraceful behaviour is eradicated from the game for good.

England players had been met with a chorus of boos when they took the knee at the start of the match, and the febrile atmosphere exploded after the visitors took the lead through Raheem Sterling in the second half.

The winger was pelted with objects as he celebrated with his teammates near Hungary fans, although England stars earned praise for their reaction – including Declan Rice and Jack Grealish, who both taunted the home fans by picking up two of the cups hurled onto the pitch and pretending to drink from them.

One Hungary fan was also seem storming the pitch towards the end of the game before being tackled by security.

The English FA have said they would ask FIFA to investigate the matter.

“It is extremely disappointing to hear reports of discriminatory actions towards some of our England players,” a spokesman said.

Hungary had already been ordered by European football governing body UEFA to play their next two matches in empty stadiums after racist and homophobic abuse from supporters in Budapest during the European Championship in the summer.

As Thursday’s game was a FIFA World Cup qualifier, rather than a UEFA event, the match was not covered by the ban.

However, FIFA will face increasing calls to act after Thursday’s scenes were widely condemned. 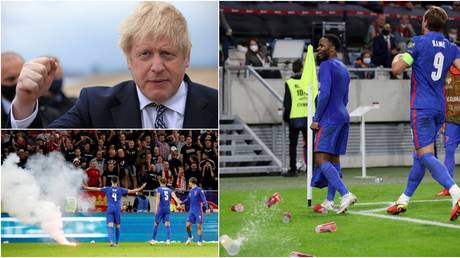 ‘Pandemic of the unvaccinated’: Ge...