Wheelock has been hired by adult website ImLive.com to ‘commentate’ on their webcams, and in particular help blind users get a full appreciation of the intimate ins and outs of all the bedroom action.

“I’m a broadcaster, my skills include being able to describe the action, whether it be on the field or in the bedroom, accurately and intimately enough so that viewers do not need to be able to see a screen to know what is going on,” Wheelock said in a press-release.

Wheelock has also worked as a commentator for football federation CONCACAF, and said he was enthused by the chance to help blind people get their kinky kicks.

“When you’re calling the play-by-play for the sporting event, you sometimes take for granted the people watching at home,” he said.

“Being able to participate in the project knowing that I’m enhancing a blind person’s enjoyment and pleasure in a chat that they otherwise would not be able to experience makes me appreciate the things that I maybe take for granted.”

Reports earlier this year stated that famous Fox announcer Joe Buck had turned down $1 million for the same gig on the ImLive webcams, although the company has now found its man in Wheelock.

“The live sessions will be commentated on by a sports broadcaster giving the play-by-play on what’s going down so that the user can properly visualize what’s happening on the screen in front of them,” a company press release read.

“Adult entertainment for the visually impaired has been severely lacking over the years, particularly in the live camming arena, and ImLive4TheBlind is happy to provide this service to an underserved community.

“There’s no reason why a blind person should not be able to experience the arousal and gratification that can come with a live cam session. Our broadcasters are professionals who know how to build anticipation and can create a clear picture for users in real-time.”

Wheelock commentated for Bellator between 2010 and 2015, before moving on to a role at the Kansas Athletic Commission.

Switching from describing grappling on the mat to groping in the bedroom, numerous fans said they thought Wheelock’s MMA experience would come in surprisingly handy in his new employment.

It had to be an MMA guy.

Expect to hear “takes her back” and “in full guard” a lot. 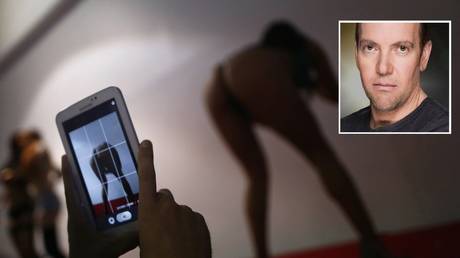