Close
Trending News
HomeSportEnd of an era? With Lionel Messi’s continued issues on and off the pitch, could Ronald Koeman hasten ‘Leo’s’ Barcelona exit?

End of an era? With Lionel Messi’s continued issues on and off the pitch, could Ronald Koeman hasten ‘Leo’s’ Barcelona exit?

End of an era? With Lionel Messi’s continued issues on and off the pitch, could Ronald Koeman hasten ‘Leo’s’ Barcelona exit?

If we’ve learned one thing over the past few months, it’s that Lionel Messi isn’t happy, and the shadow cast over Barcelona is having an effect on the club’s fortunes as they look to rebuild under new boss Ronald Koeman.

With turmoil in the boardroom and things seemingly falling apart in the dressing room, Messi attempted to exercise a clause in his contract to get himself out of the Camp Nou and off to pastures new, where a colossal contract and the adoration of a new set of fans would surely await.

However, that clause expired long before he attempted to exercise it and, despite the extended nature of the 2019/20 season, it soon became clear that, for this year, at least, Messi had missed his window.

It meant Messi had to make a humiliating climbdown and commit to staying with the Catalan club until the end of the 2020/21 campaign, but the damage, it seems, has already been done.

Though Messi’s rift with last season’s boss Quique Setien has been solved by his sacking, while the club president Josep Bartomeu has also resigned following a vote of no confidence.

But the two big departures have seemingly not prompted a return to form for the team, or their star player. Setien’s replacement, Dutch legend Ronald Koeman, is trying to rebuild a team in turmoil following their UEFA Champions League capitulation to Bayern Munich last season. And, even though Messi has a new boss, he hasn’t found his old form, with some fans questioning his commitment to the cause during some of the team’s recent defeats.

Now the Argentinian ace has found himself under the spotlight after being approached by the Spanish tax authorities upon his return from international duty.

On top of that, Antoine Griezmann’s agent has made matters even more uncomfortable by accusing Messi of having too much influence at the Camp Nou club, and that it has affected Griezmann’s own form since his arrival from rivals Atletico Madrid last year.

It all means the pressure is piling on Messi, while the club itself continues to struggle. Messi let his frustration be known when he returned to Barcelona on Wednesday, telling reporters, “The truth is that I’m a little tired of always being the problem for everything at the club.

“On top of that, after a 15-hour flight, I had the tax authorities waiting for me. It’s madness.”

The tax issue is likely the biggest concern for Messi right now. In 2016 the Argentine was handed a 21-month prison sentence and ordered to pay a fine of $2.37 million for defrauding the Spanish government of $4.97 million over income earned from image rights.

Messi avoided jail time after exchanging his custodial sentence for a fine of $296,000, with his term served on probation under laws dealing with first-time offenders in Spain. But another brush with the tax man may bring more severe penalties.

As for his form on the pitch, Messi has scored six times for Barca so far this season, but just one of those strikes has come from open play, suggesting that he’s struggling to rediscover that potent form in front of goal that made him

With Messi feeling the heat, on and off the pitch, and with a team in transition it begs the question of whether Koeman may look to shock the footballing world and actually put his star man up for sale in the upcoming January transfer window.

Under the terms of his contract, Messi can walk away for free in the summer, if he expresses such a desire within the appropriate time, and as things stand, any plans for the club to somehow convince him to stay are looking on shaky ground, at best.

Messi would command a colossal transfer fee, though perhaps not as large as it would have been before his contractual clause surfaced in the summer.

But, with the likes of Paris Saint-Germain and Manchester City possessing the sort of capital that could make a big-money deal a possibility, the option appears to be there for Barca to cash in big on their disgruntled star.

It would be an undoubted blow to the fans in Catalunya, who have worshipped Messi as their hero ever since he came through the ranks at Barca.

But, when faced with the prospect of losing him for nothing next summer, the opportunity is there for Koeman to use the proceeds from Messi’s sale to rebuild a new team for the next era of the club’s history.

Indeed, even with Messi, Barcelona are struggling. With the income generated from his sale, Koeman could potentially add a number of key pieces to his lineup to give his team greater strength across the pitch, and make them a stronger, more competitive unit.

The days of relying on one talismanic figure could soon be replaced by greater shared responsibility, without the pressure of having to channel their play through one man.

Even the Spanish league is preparing for life without Lionel, with La Liga president Javier Tebas making a defiant statement about his competition’s ability to move on strongly without one of the world’s greatest players.

They say nothing lasts forever and perhaps, considering all of the issues at play and the need for Barcelona to emerge from a period of turmoil, Messi’s final chapter at the Camp Nou could come sooner, rather than later. 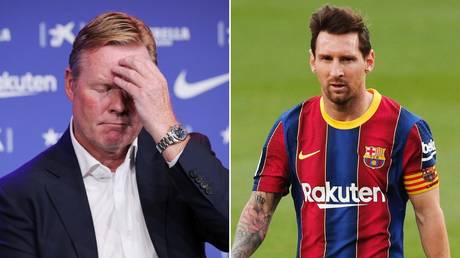 'This shouldn't be allow...