Manchester United are reportedly willing to sack manager Ole Gunnar Solskjaer if their season does not improve, with the Red Devils and rivals Manchester City said to be eyeing Mauricio Pochettino as their next coach.

According to The Mirror, United chief Ed Woodward “will have no hesitation firing” the Norwegian despite his legendary status at the club if he’s unable to turn around their poor start to the campaign.

The same outlet also reported the Argentinian – who remains available after leaving Tottenham Hotspur last year – is considered a prime candidate to replace Solskjaer, while City are also said to be keen to bring him in if Pep Guardiola should leave the Etihad Stadium.

Solskjaer guided United to third in the Premier League last season as well as the semifinals of the UEFA Europa League, FA Cup and Carabao Cup.

The Red Devils have endured a disappointing start to this campaign, however, losing 3-1 and 6-1 at home to Crystal Palace and Tottenham, respectively, with doubts remaining over their manager’s coaching credentials.

Prior to taking over at Old Trafford, Solskjaer’s first-team coaching career had been restricted to managing Molde in his native Norway and overseeing Cardiff City’s relegation from the Premier League in 2014.

As for City, they’re somewhat unlikely to sack Guardiola given he has delivered eight honors since he took charge in 2016, including back-to-back league titles.

However, the club have continued to underperform in the UEFA Champions League and have not even reached a semifinal under him. Last season, they failed to beat Lyon in the last eight.

They’ve also endured a poor start to this campaign, dropping five points in their first three league matches with a 5-2 defeat against Leicester City and a 1-1 draw with Leeds United.

Guardiola is in the final year of his contract at the club, though in September he said he wants to extend his stay beyond 2021.

Pochettino is yet to deliver a trophy in his managerial career, but he’d be a fine choice for either club having shown himself to be an excellent coach.

The 48-year-old took charge of Spurs in 2014 after guiding Southampton to eighth in the Premier League.

Despite having fewer resources compared to their domestic rivals, Tottenham finished in a Champions League spot in four of his five full seasons in charge, and the team also reached the Champions League final in 2018-19. 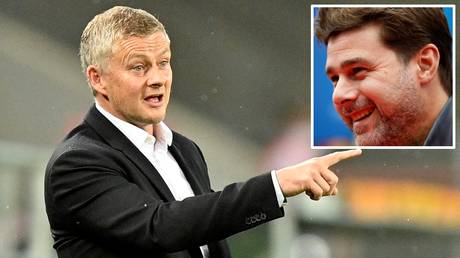