The UFC’s number one pound-for-pound fighter on the planet’s company ‘Khabib Telekom’ has applied to patent the company logo ‘Eagle Mobile by Khabib’, according to information reported by Rospatent, Russia’s Federal Service for Intellectual Property.

The mobile virtual network operator (MVNO) will provide wireless communications services through a sim card that can be used on any device, and is named after Khabib’s ring name ‘The Dagestani Eagle’.

The service come with the added bonus of providing a loyalty scheme that will reward users for their custom with signed merchandise from the 29-0 fighter, exclusive clips of his fights, or a photo opportunity with the fighter.

“Network users often have issues with their operators about a range of hidden charges from their account. Khabib’s personal responsibility is so that such situations don’t occur, and also the loyalty and enthusiasm of his following will be instrumental in the switch of a chunk of users to Eagle Mobile services,” Mikhail Lechtman, a legal representative for the firm, said, Russian outlet RBK reported.

Khabib’s official capacity within the company will be the co-owner and face of the brand, but the 32-year-old, who beat Justin Gaethje by 2nd round submission to retain his 155lbs crown before retiring, will not take any part in the day to day running of the firm.

Although officially retired after pledging to keep a promise to his mother, there have been rumors of Khabib making a comeback, that have been fuelled by his manager Ali Abdelaziz. 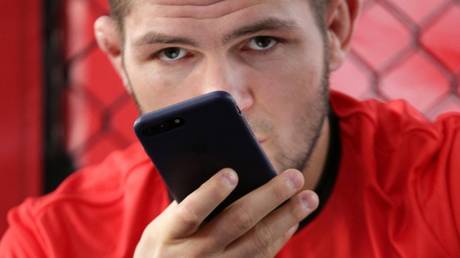