Dutch Olympic skateboarder Candy Jacobs has blasted conditions at a Tokyo quarantine hotel as “inhuman”, after missing an event at the Olympic Games due to her ongoing eight-day stay in isolation.

The Netherlands competitor said she had to force officials into permitting her a short break under supervision away from her room to get some fresh room, as her accommodation’s window doesn’t open.

“Not having any outside air is so inhuman,” complained the 31-year-old in a video on her Instagram account, which she has also used to provide other updates such as practicing from her room.

“It’s mentally super draining…definitely more than a lot of humans can handle.”

Jacobs had been staying in the Olympic Village but was then removed and put into a separate quarantine facility for those present at the Tokyo 2020 Games, where she has missed a street event, with the virus.

On the seventh day of her isolation, she claims to have refused to move.

And after over seven hours, Jacobs alleged, officials agreed she was allowed to stand near an open window for 15 minutes while also supervised.

“Having that first breath of outside air was the saddest and best moment in my life,” she admitted.

Despite not getting a chance to compete in the street event herself, Jacobs still praised 13-year-old gold skate medalist Momiji Nishiya from Japan, and conceded that watching the win on TV provided “a super-cool distraction” away from the drudgery of quarantine.

“This ride has been the wildest I have ever been on and hopefully I never have to go through something like this again,” remarked Jacobs, who by her own admissions has continued to test positive for Covid-19. 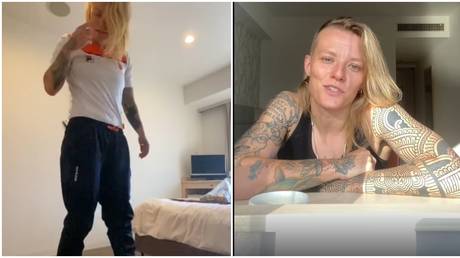