London’s Metropolitan Police say that 30 football fans were arrested for an array of offences following England’s Euro 2020 stalemate with Scotland at Wembley on Friday evening.

Crowds of fans assembled at London’s Leicester Square following the 0-0 draw in the English capital during which Gareth Southgate’s team were outworked by their Scottish counterparts, who will likely feel aggrieved Saturday morning that they weren’t able to emerge from the so-called’ Battle of Britain’ with three points which would have bolstered the Scots’ chances greatly of advancing to the knockout stages of the competition.

However, the celebratory mood was tempered somewhat by a series of clashes and public order offences which prompted police to enter Leicester Square at around 12.45am local time and compel fans to leave the area.

Police say that the area was clear by 1.15am but Scotland Yard have since announced that 30 people were arrested – with 25 of those taking place in Central London and another five from around Wembley Stadium.

“13 arrests were for public order offences, six for drunk and disorderly, four for assault on police, three for assault, two related to class A drugs and one each for breaching a dispersal order and breaching a banning order,” said Scotland Yard of the series of incidents.

Among the public order arrests, reports Sky Sports, were arrests for racial aggravation and for the assault of a police officer.

Police instituted a dispersal order in an attempt to control the crowds, which remains in place until 3pm local time on Saturday.

Leicester Square, which is one of the city’s most popular tourist spots, had a distinctly Scottish hue to it following the game, with the Tartan Army – many of whom were dressed in kilts – danced and set off flares.

Others sang the Scottish national anthem and declared “No Scotland, no party“.

“London remains in a public health crisis. There are government guidelines in place and we ask people to follow these and remain socially distanced,” said Chief Inspector Joe Stokoe, who is in charge of the Met Police’s public policing during Euro 2020.

“We have contingency plans to deal with any number of potential incidents as they arise but my message is clear: if you don’t have a ticket to the matches, fan zone or officially booked into a pub, bar or club, please do not come to London – you could end up missing the game.

“Last night we took the precaution of issuing a section 35 dispersal order that is in place until 15:00hrs on Saturday, 19. We have a flexible policing plan in place to reduce the likelihood of crime, disorder and anti-social behavior.” 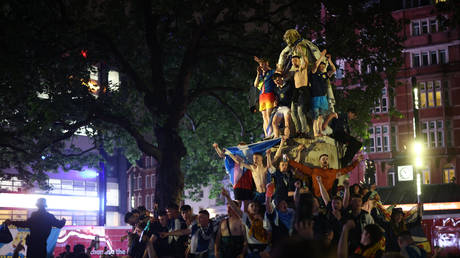