Close
Trending News
HomeSportDown and out: Cycling world champ SCREAMS in pain after FLIPPING over top of bike in agonizing crash with race motorcycle (VIDEO)

Down and out: Cycling world champ SCREAMS in pain after FLIPPING over top of bike in agonizing crash with race motorcycle (VIDEO)

Down and out: Cycling world champ SCREAMS in pain after FLIPPING over top of bike in agonizing crash with race motorcycle (VIDEO)

Julian Alaphilippe has suffered a horrifying end to the Tour of Flanders, colliding with the back wheel of a motorbike in a crash that sent the road racing world champion over the top of his bars and head first onto the road.

Frenchman Alaphilippe was around 22 miles from the finish at the Tour of Flanders in Belgium when disaster struck as he broke away with Mathieu van der Poel and Wout van Aert.

After his rivals edged out of the slipstream of the motorbike, Alaphilippe had hardly any time to react as his front wheel hit the back of the vehicle.

That sent the luckless Deceuninck–Quick-Step rider hurtling towards the ground as his bike flipped sickeningly up into the air, hitting the deck at speed in a shocking end to his challenge.

“The world champion is on the deck!”

Julian Alaphilippe collides with a motorcycle, flips over and his race is over! 💥

The guy is a joy to watch racing but he should have been paying attention. Not the motos fault.

Also because Van Aert didn’t move enough on his left to give Van Der Poel and Alaphilippe enough space and time to react. It was not intentional from Van Aert but whoever was 3rd would have hit the moto

After initially sprawling on the road, the downed Alaphilippe attempted to rise to his feet while officials tried to help him.

He soon realized the extent of his injuries, which appeared to have been caused to his wrist and collarbone, and could be heard screaming in pain as a medic arrived at the scene.

Speaking to Eurosport, who reported that Alaphilippe had broken his collarbone, former world number one Sean Kelly said the speed of the motorbike could have surprised him.

“The motorbikes were slowing a bit, going slower than the riders,” observed Kelly.

Nobody wants to see an injury , or the crash that caused it, but you can’t blame it on the motorbike – Alaphipippe crashed into him!

Awful crash, literally just talking about “the curse of the rainbow jersey” when it happened. I hope Julian is ok 😢

“Van der Poel was also very close and flicked out and got around them, but Alaphilippe did not see it in time, touched the side of the moto and looks to have done some damage.”

Van der Poel went on to edge out Wout van Aert in a dramatic finish on another frustrating day for Alaphilippe after he crashed out of the opening stage of the Tour de France following a technical issue.

Some fans on social media spotted that Alaphilippe may have been distracted by a conversation on his microphone shortly before the crash, while others questioned the position of the motorcycle.

The crash could mean that the 28-year-old’s season is over, although neither Alaphilippe nor Deceuninck–Quick-Step issued a medical update in the immediate aftermath of the race. 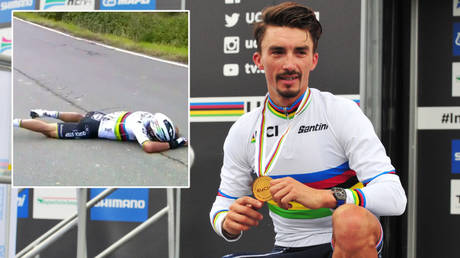