Two-time Olympic gold medal winner Gertaint Thomas has crashed out of the Giro d’Italia as scans reveal he suffered a fractured pelvis after he was involved in a high-speed spill after cycling over discarded water bottle.

British rider Thomas, who was the pre-race favorite to win, took the nasty fall after he lost control of his bike after he rode over a water bottle which appears to have been discarded by a fellow cyclist during the the neutralized start of the stage in Enna on Monday.

The collision sent Thomas tumbling to his left where he landed hard on his hip, before incredibly finishing the stage more than 12 minutes down from the leader before he was sent for X-Rays which soon confirmed the extent of the 34-year-old’s injury.

Results of the scans on Tuesday showed that Thomas experienced a “small undisplaced fracture in the lower part of the pelvis“. No timeline has yet been announced as to when Thomas will be fit to return but it remains unlikely that he will race again in 2020.

2020 you can just do one now🤬Thanks for all your well wishes though guys🙌😘 pic.twitter.com/UTm0JKs1Uz

“It’s so frustrating,” Thomas said of his injury. “I’d put so much work in to this race. I did everything I could and feel like I was in just as good, if not better shape, than when I won the Tour. I was feeling really good. So for it just to end like this is gutting.

“I was really up for starting today. I woke up and wanted to start with the boys and at least help them go for stages over the next few days, but deep down I knew something wasn’t right, so we went to get these extra scans.

“It does make the decision easier when there’s a fracture in some ways, because obviously I don’t want to do any more damage.”

Thomas took to social media early on Tuesday to bemoan what he sees as the latest of several setbacks both he and the larger community have experienced so far this year.

It is a particularly cruel blow for the Welshman, who had targeted this race above the recent Tour de France and had emphasized his status as the favorite to win the Giro d’Italia after an excellent performance in Saturday’s opening time trial where he placed ahead of his expected rivals. 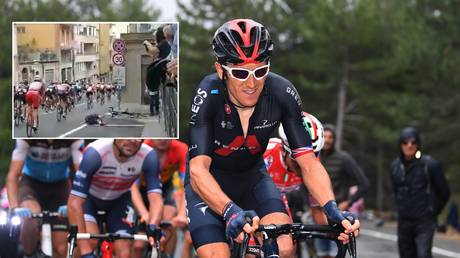