In scenes doing little to conflict remarks by a former confidante that Lionel Messi is “emperor and monarch” at Barcelona, fans have been seen telling Antoine Griezmann to show “respect” for the club legend while pursuing his car.

France forward Griezmann was driving away from the club’s Ciutat Esportiva Joan Gamper when a group of fans spotted his Rolls Royce, shouting at him to “respect Messi” in an incident that has been picked up by the media in Spain.

Eric Olhats, Griezmann’s former advisor, told France Football last week that Messi had a “deplorable attitude” and was responsible for a “regime of terror” at the Spanish giants.

Griezmann’s uncle, Emmanuel Lopes, has since admitted that the club’s new $142 million signing has faced a longer struggle to establish himself than he expected and has not been helped by Messi’s alleged laziness.

“He was convinced that he wasn’t going to be successful within the first six months, but what I didn’t expect was that it would last an entire year,” Lopes told El Chiringuito.

“Besides, with Messi, I know what’s going on inside [the club] – it’s not easy.

“Basically, [Messi] doesn’t work hard enough at Barca and the training sessions are structured in order to please certain people, which is fine if you don’t want to work.”

Griezmann has not offered any public response and is unlikely to welcome the fresh conjecture around his relationship with the club’s all-time top scorer.

The 2018 World Cup winner has admitted in the past that he has taken inspiration from the Argentina icon and has copied his technique in training sessions during matches.

“Griezmann has not said anything but, as a professional, he needs to talk to his people and tell them to stop getting involved in things that don’t concern them,” said one fan on Twitter.

“The only thing they cause is conflict for him, for his teammates and for Barcelona.”

One of their former teammates, Ivan Rakitic, reportedly told radio station El Pelotazo this week that he got on “wonderfully well” with both players.

🗣 — Víctor Font: “It is clear that Barcelona should not have signed Griezmann because he plays in the same position as Messi.” pic.twitter.com/Fx5taIOMjy

“What I saw was that they got along very well,” said the Sevilla midfielder. “They drank tea together and spent a lot of time together in the dressing room.”

Griezmann’s greatest current problem could be that he has been involved in only three goals in nine appearances this season, taking more than twice as long as Messi to average a goal during the campaign so far.

Speaking about Messi last year, the former Atletico Madrid hotshot told reporters: “He is not someone who talks a lot and neither am I. It’s difficult.

“I have already given him some tea and we are going in the right direction. But he has been injured a lot so it is difficult to make this connection, to improve it.

“We are two good guys, nice people, and I’m here to help anyone on the team.” 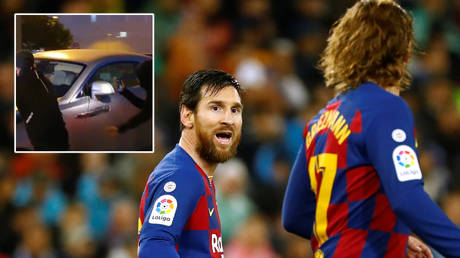