Russia boss Stanislav Cherchesov watched Lokomotiv Moscow’s first home game of the season next to UFC lightweight champion Khabib Nurmagomedov and admitted he had been “pleasantly surprised” at the fighter’s football knowledge.

Nurmagomedov took time out from training for his return to the Octagon to watch the Russian giants continue their perfect start to the season, winning 1-0 with a fine 43rd-minute goal by Aleksei Miranchuk that would have impressed Cherchesov, the midfielder’s national team manager.

The coach who led his side to the quarter-finals of the 2018 World Cup on home soil clearly enjoyed spending time with Nurmagomedov, presenting him with a football from the tournament and praising his comprehension of the game.

“I am pleasantly surprised at how much he understands professional football,” revealed the 56-year-old former Lokomotiv goalkeeper.

“I planned to give him an autographed ball of the Russian national team much earlier. Today I found the addressee.”

The result meant Lokomotiv remained yet to concede a goal this season, having won 2-0 at Rubin Kazan on Tuesday.

They are level at the top of the early table with the other two teams to win two out of two, reigning champions Zenit St Petersburg and CSKA Moscow.

Filming his view from across the halfway line, Nurmagomedov told 20-year-old Krasnodar winger and Russia Magomed Suleymanov not to be discouraged by his team’s narrow defeat.

Nurmagomedov is clearly a lucky charm for Miranchuk, who also drew Lokomotiv level under the UFC king’s gaze while he watched friend Cristiano Ronaldo and Juventus visit Moscow for a Champions League Group D match in November.

Ronaldo, who had gifted Nurmagomedov a match-worn shirt while he was starring for Real Madrid, had the last laugh as teammate Douglas Costa scored a last-gasp winner to give the Italian champions a 2-1 victory.

The 31-year-old Dagestani is thought to support hometown club Anzhi Makhachkala and Madrid, bumping into former Paris Saint-Germain midfielder David Beckham when he attended a Champions League match between PSG and the Liga winners last September.

Beckham and Nurmagomedov subsequently had dinner together, and the former England midfielder was among those to offer touching messages of support following the death of his father, Abdulmanap, last month.

Thanking Cherchesov for his company, Nurmagomedov said he had enjoyed the experience and wished Russia well in their upcoming matches.

The unbeaten fighter is scheduled to return to action for the first time in more than 13 months when he faces Justin Gaethje on October 24. 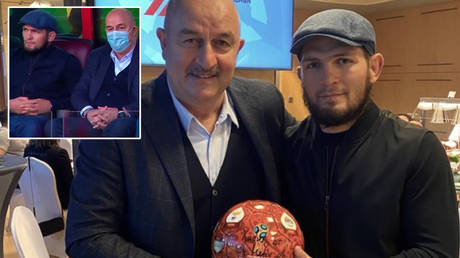 'We could be writing obituari...