Close
Trending News
HomeSport‘DON’T heal me’: Russian skating icon Slutskaya hits back at flood of ‘INSANE’ messages after opening up on her incurable illness

‘DON’T heal me’: Russian skating icon Slutskaya hits back at flood of ‘INSANE’ messages after opening up on her incurable illness

‘DON’T heal me’: Russian skating icon Slutskaya hits back at flood of ‘INSANE’ messages after opening up on her incurable illness

Russian figure skating legend Irina Slutskaya has admitted her astonishment at the replies she received after speaking out about blood vessel condition vasculitis, asking concerned fans to stop sending her treatment suggestions.

Slutskaya said she had been inundated with messages after speaking about the condition, which forced her to retire from figure skating in 2006 and can cause renal failure and bleeding.

The Russian great has learned to manage the condition ever since she returned from a lengthy hospital stay in 2005 to win the World Championships on home turf in Moscow and, the following year, break the record for female European Championships victories.

“America was discovered yesterday,” Slutskaya joked in a post articulating her weariness at shocked reactions to her illness.

“The information is as old and as ancient as an extinct mammoth. But just yesterday it somehow became a sensation.

“I have been living with vasculitis for 17 years. This story has become overgrown with insane details.

“I was very surprised by the number of messages offering help. I was ‘treated’ for AIDS, lupus erythematosus and rheumatoid arthritis.

“Dear caring people: I only trust evidence-based medicine. Don’t heal me. For this, there are doctors who I believe.”

Despite some concerns from doctors, Slutskaya has had three children since retiring from the sport she excelled at, including giving birth to a daughter, Kira, with her second husband in October.

Fans of the two-time Olympic medalist claimed that the media had little else to talk about during an unexpectedly quiet year for figure skating.

Slutskaya retains a huge public following and was keen to emphasize that her life had not been unduly affected by vasculitis, which is rarely fatal when treated properly.

Many modern figure skaters take inspiration from her early perfection of the triple lutz-triple loop combination and her invention of the double Biellmann spin with a foot change.

“I never focus on the disease because I have had many achievements in my life,” she explained.

“I have a story to tell about myself. I think it will be a long time before my records are broken.

“I am proud that I was the first to perform the most difficult elements that are now being performed. I am proud to be included in the Guinness Book of Records. But not because I’m sick.

“I’m talking about vasculitis…so that people who have this disease see the impetus for life, and not just to sit and ‘get ready’. I am very glad that I inspire many.

“It is possible to live perfectly in remission and give birth to three children, like me. Be healthy.” 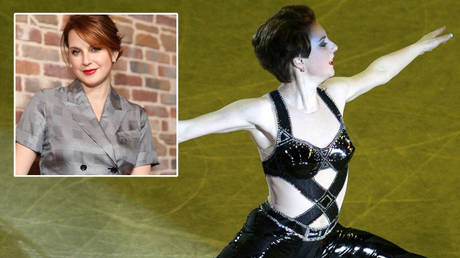