Basketball fans have reacted with a mix of shock and outrage after reportedly unvaccinated star Bradley Beal played at Madison Square Garden while Brooklyn Nets star Kyrie Irving continues to be frozen out.

New York City Covid protocol determines that home team players cannot ply their trade at venues such as the iconic MSG court of the New York Knicks and the Nets’ Barclays Center without at least one dose of their vaccine.

An important player for the latter franchise, Kyrie Irving, has been sidelined after refusing to get the jab and will not feature at all for the championship-fancied team – at team training or home and road games – until he is a “full participant” in NYC’s Covid protocol.

“I know the consequences here and if it means that I’m judged and demonized for that, that’s just what it is,” Irving has said regarding his stance.

“That’s the role I play, but I never wanted to give up my passion, my love, my dream just over this mandate.

“So what? It’s not about the money,” he said in relation to how hard his pocked will be hit, reportedly to the tune of more than $17 million.

“It’s not always about the money. It’s about choosing what’s best for you. You think I really want to lose money?”

Causing further controversy on Saturday, however, was the observation from a New York Knicks beat writer that alleged unvaccinated Washington Wizards player Bradley Beal featured at MSG in his side’s 115-113 loss to the home team.

“That part doesn’t seem fair at all.”

Coming off a knee injury, Beal only played nine minutes but managed a rebound, two assists and five points.

Furthermore, the hypocrisy and double standards of his very presence irked some elsewhere on Twitter, who made their feelings known when replying to post that asked if the different treatment was unfair.

Bradley Beal is unvaccinated and is eligible to play every game this season, including those in New York and San Francisco.

“It says a lot about each organization,” began one criticism.

“Being unvaccinated is not a crime. Honestly, as long as anyone unvaccinated passes a COVID-19 test, they should be allowed to continue their life as normal.”

“[It’s] totally unfair, nevermind the fact that the cities [involved] don’t require travelers to be vaccinated or even all of their own residents. This makes you wonder what is their real reason behind pushing Kyrie to get vaccinated,” said another.

“I am fully vaxxed. I am 100% for the vaccine and the science behind it. I am 100% against the inconsistency here by the NBA. This is just going to increase vaccine hesitancy by seeing this take place on the national stage during NBA games or on Sportscenter.”

Not everyone agreed, however.

“Both these dudes wanted to exercise their freedom of choice, which in this situation I don’t agree. So the law is exercising its freedom and the fact that it’s not fair is irrelevant. They are free to be unvaccinated and the law is free to govern! So be it!” pointed out one party.

Kyrie has no excuses

No, not unfair. Just get vaccinated and stop trying to act more interesting than you really are Kyrie.

“No, [it’s] not unfair. Just get vaccinated and stop trying to act more interesting than you really are Kyrie,” demanded one fed up individual.

“Beal has a medical reason since he caught Covid a few months ago, they advise for him to take it a certain time after he caught Covid. Kyrie has no excuses,” someone else highlighted.

“He does have an excuse, he [doesn’t] want to take the sh*t…Nuff said,” came one reply to that.

for all those confused in the comments, allow me to clarify. The state of New York can only mandate vaccines on their own citizens. brad beal isn’t a NY resident, and they can’t prevent non-citizens from work opportunities within their state. that’s how i understood that rule.

“For all those confused in the comments, allow me to clarify,” started off a voice of reason.

“The state of New York can only mandate vaccines on their own citizens. Bradley Beal isn’t a NY resident, and they can’t prevent non-citizens from work opportunities within their state. [At least] that’s how I understood that rule.”

According to reports, the loophole to allow situations such as Beal’s could be closed by local New York State authorities so that even road players performing in the state can only do so if vaccinated. 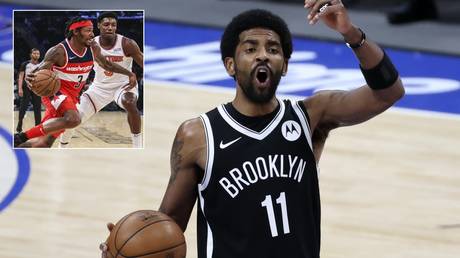