Their rivalry may have cooled since the explosive days of their clashes in La Liga, but there is still a simmering animosity between Jose Mourinho and Pep Guardiola if the pair’s latest comments are anything to go by.

Guardiola leads his Manchester City team to Mourinho’s Tottenham in the Premier League on Saturday, renewing a managerial rivalry which is one of the most intriguing – and often bitter – in modern football history.

The latest salvos were fired this week when Guardiola snapped back at suggestions by Mourinho that undue pressure had been applied on England manager Gareth Southgate to release City winger Raheem Sterling from the England squad for recent international matches.

“Mourinho has to go to the doctors for the national team from England and from Manchester City,” Guardiola said as he dismissed any notion of underhand tactics.

“He has to go to the doctors – except if Mourinho maybe is a doctor. I don’t know.”

The withering response came after Mourinho had delved back into the managerial dark arts, speculating that some of his Premier League rivals were pressuring England manager Southgate to rest key players – leaving the likes of Spurs at a disadvantage.

“Of course we all know Sterling is going to play for City against us,” the Portuguese had said.

“When Eric Dier left the national team injured in the past month, he didn’t play two matches for Tottenham. He needed a couple of weeks to recover. And Raheem is going to play.

“Gareth, I read, supposedly told that some club managers put pressure on the players not to play for the national team.

“And because of that he feels sometimes the need to call club managers to cool down the emotions and control a difficult situation for him.

“The only problem for me is it should be the same for everybody, not just for some.”

Guardiola, who this week penned a new deal with City to keep him at the club until the summer of 2023, refused to be drawn further on those claims, but his ire was clear.

“Listen, I’m not going to answer anything about Jose,” said the City boss.

“I said about the doctor because he accused something we have done which is not true, so he has to speak with doctors about all these other things.

“Don’t ask me because I’m almost 50, so I’m old enough to understand.”

Both Guardiola and Mourinho have played down any notion of a rivalry in recent years, but the history shared by the two serial winners has been undeniably fiery and pockmarked by flashpoints.

Indeed, a friendship initially forged at Barcelona in the 1990s – when Guardiola was a senior player and Mourinho an assistant to Bobby Robson – has frequently disintegrated into open hostility.

FINGER-POINTING AND ‘THE DOG’S BOLLOCKS’

An ominous early sign was when Mourinho led Inter Milan to a shock Champions League semi-final win over Guardiola and defending champions Barcelona in 2010, famously holding out with 10 men in a heroic second leg at the Nou Camp, after which Mourinho charged onto the pitch with a finger raised in celebration.

The Portuguese would go on to guide the Italians to the Champions League title, before heading to Spain to take over at Real – where tensions with Guardiola would boil over spectacularly.

Increasingly riled by Mourinho’s jibes and mind games, Guardiola famously took the bait after Real got one over on the Catalans by beating them in the 2011 Copa del Rey final, with the Barca boss stating afterwards: “Jose is the dog’s bollocks in front of the press. I can’t compete with him there.”

The following season, things would turn even uglier in the second leg of the 2011 Spanish Super Cup, when a mass melee sparked by Marcelo being sent off led to Mourinho gouging the eye of Barca assistant boss Tito Vilanova – earning the Portuguese firebrand a two-game ban.

The Guardiola-Mourinho feud was not even put to bed when the Spaniard left Barcelona and later headed to Bayern Munich.

When Mourinho’s Chelsea met the Germans in the 2013 UEFA Super Cup, Bayern ended up winning on penalties, coming from behind twice during a match in which Chelsea had Ramires sent off – continuing a pattern of Mourinho seeing players from his teams given an early bath in meetings against Guardiola.

“Every time I play Pep I end up with 10 men. It must be some sort of UEFA rule. The best team clearly lost. They just scored one more penalty,” Mourinho would later scorn.

The rivalry cooled when Guardiola came to English shores to take over at City, although there was still time for the occasional barb from Mourinho, who by that time was Manchester United boss.

That included a dig over a supposed lack of respect shown by Manchester City toward the Portuguese and his United team in their Amazon documentary ‘All or Nothing’.

The latest exchange between the pair puts us in familiar territory leading into Saturday’s clash at the Tottenham Hotspur Stadium, where the hosts – who lie second in the table – will be looking to increase the five-point gap over 10th-placed City, who have endured a stuttering start to the current campaign.

A win for either team – and bragging rights for Mourinho or Guardiola – would be just what the doctor ordered. 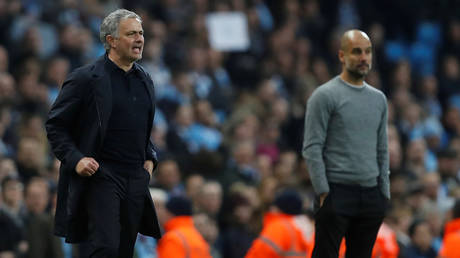