Close
Trending News
HomeSport‘Do you know what you’re getting yourselves into?’ Hollywood duo Reynolds & McElhenney to seal takeover of Welsh minnows Wrexham

‘Do you know what you’re getting yourselves into?’ Hollywood duo Reynolds & McElhenney to seal takeover of Welsh minnows Wrexham

‘Do you know what you’re getting yourselves into?’ Hollywood duo Reynolds & McElhenney to seal takeover of Welsh minnows Wrexham

Hollywood actors Rob McElhenney and Ryan Reynolds are set to complete their unlikely takeover of Welsh football team Wrexham, with fans greeting the news with joy but also puzzlement as to how the partnership will play out.

The takeover by ‘Deadpool’ star Reynolds and fellow actor McElhenney was given overwhelming backing by the Wrexham Supporters Trust (WST) on Monday, with a resounding 98.6 percent voting in favor of the move.

The deal for control of the club, which plays in the fifth tier of the English football pyramid, will now be subject to confirmation from the Football League and FA

“Both parties will now proceed with finalizing the details of the takeover, and we will update Wrexham supporters as soon as we can,” a statement read.

Hollywood heartthrob Reynolds and pal McElhenney appeared in a satire-heavy clip shared by the club’s Twitter account in which they confirmed the news of the impending takeover.

A message from our owners-elect…

The post no doubt baffled some of the actor’s followers Stateside, who are unlikely ever to have heard of the market town not far from the English border.

The Hollywood pair have vowed to turn Wrexham into a “global force,” issuing a mission statement to fans on the club’s website.

“We’re two people who’ve made a career of never taking ourselves too seriously. However, we realise taking stewardship of this great and storied club is an incredibly serious matter and something we don’t take lightly,” the pair wrote.

They pledged to protect the club and its famous Racecourse Ground, as well as attend matches whenever their schedule allowed for it.

Among the promises was to “always beat Chester,” the club’s bitter rivals.

Fans responded to the news by welcoming the pair, although some did wonder whether they knew exactly what they’d got themselves into.

This may turn into a nightmare. But lets just enjoy the fact that it’s bloody nice to see some American owners buy a football club to have some fun instead of the usual shower of sh*te. And remember. *Always beat Chester. #Wrexham

Famous Wrexham fans include Twitter icon ‘Bootlegger’, a pub-loving local celebrity who is rarely without a pint in his hand.

You’ve no idea what you’ve got yourself into 🤣pic.twitter.com/ODrHNgB2hJ

Founded in 1864, the club has a proud history and lays claim to being the oldest in Wales and the third oldest professional football team in the world.

They have won the Welsh Cup a record 23 times, and have featured in European competition, famously upsetting Portuguese giants Porto in the European Cup Winners’ Cup in 1984.

They reached as high as the second tier in English football in the 1970s and 80s, but have been languishing in the country’s fifth division for more than a decade.

Fans will have their fingers crossed that the new change in owners has a Hollywood ending for all concerned. 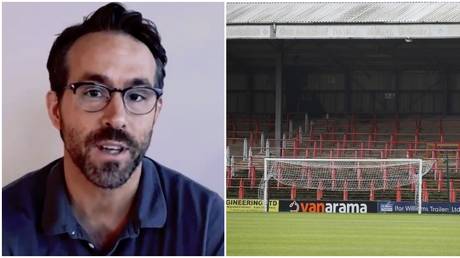