‘Do we live in primitive society?’ Belarusian Olympic legend Domracheva reacts after brother is ‘beaten up’ by police

‘Do we live in primitive society?’ Belarusian Olympic legend Domracheva reacts after brother is ‘beaten up’ by police

Belarusian biathlon icon Darya Domracheva has reacted to her brother’s detention in Minsk, criticizing the government for its tough actions and asking all sides to calm down and respect each other.

In an emotional social media post, the four-time Olympic gold medalist said the country is going through a turbulent period and called on the authorities to offer people more “interesting ideas rather than to arrest, beat up and fire.”

“We all see that our country has serious problems and in order to solve them it’s useless to promulgate aggressiveness on the one hand, and to fire, arrest, and beat up people in the streets on the other.

“It doesn’t matter whether those people purposefully took part in protests or accidentally happened to be in those ‘hot spots.’ It’s not important whether they are your family members or not, all people are equal. It’s obvious that such actions only separate the battling sides and aggravate the crisis,” Domracheva wrote.

“As for the government officials, I think that in order to stabilize the situation, they should offer people more interesting ideas than to arrest, fire [people], and beat up protesters. We don’t live in a primitive society, do we? Everyone should calm down and discuss everything, it will bring us close to the coveted goal – to live in a beautiful and prosperous country,” the retired athlete said.

On Monday, Domracheva’s brother Nikita was detained by police. The man said he was going to visit his mother when his bicycle ride was interrupted by police officers who reportedly started beating him up on suspicion of taking part in anti-government protests.

Belarus has been engulfed by large-scale protests since the presidential election in August, which saw Alexander Lukashenko claim his sixth term with 80 percent of the vote. 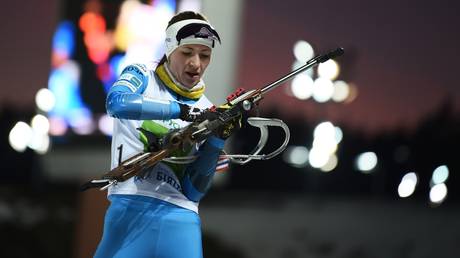