‘Do NOT let this man leave!’: Wantaway Giroud comes off bench to head Chelsea into Champions League knockout stages

‘Do NOT let this man leave!’: Wantaway Giroud comes off bench to head Chelsea into Champions League knockout stages

Chelsea fans have implored Frank Lampard to ensure Olivier Giroud remains at the club after he headed Chelsea to victory against Rennes to book the Blues a spot in the Champions League knockout stages with two games to spare.

The big Frenchman rose highest to power in a header in injury time, after Rennes’ Serhou Guirassy had cancelled out Callum Hudson-Odoi’s first-half opener for the London club.

The result moved Chelsea on to 10 points from their four Champions League Group E games – enough for them to book their spot in the last 16 of this season’s competition.

Olivier Giroud puts Chelsea back ahead in the 90th minute to send Chelsea into the #UCL Knockout Stages!

Massive goal. What a header. 🔥 pic.twitter.com/LzsZIiLo5d

In the other Group E game, Sevilla also secured their place in the knockout stages by snatching a similarly late 2-1 win against Krasnodar in Russia.

In France, the plaudits were reserved for 34-year-old Giroud, who is reportedly plotting a way out of Stamford Bridge in January due to a lack of playing time, which the big forward fears could hurt his chances of featuring for his country at next summer’s European Championships.

Fans were insistent that manager Lampard should not let the popular frontman leave after he proved his worth yet again.

No way should Chelsea let Giroud go in January #cfc

Before Tuesday night in France, Giroud had played less than 200 minutes of football for Chelsea this season, but Lampard had insisted  that he would do everything in his power to keep the Frenchman at the club – a resolve which will likely only have been strengthened after the World Cup winner’s heroics when coming off the bench to replace Tammy Abraham in the 69th minute.

Guirassy thought he had rescued a point for the hosts with a thumping header of his own in the 85th minute, which cancelled out an opener mid-way through the first half from Hudson-Odoi, who latched onto a superb through-ball from midfielder Mason Mount.

Before that, German forward Timo Werner had been guilty of one of the misses of the season when he blazed over the bar from just yards out and with the goal at his mercy.

Booking early passage to the knockout stages will be a welcome relief for Lampard, who has described the club’s congested fixture list in December as “brutal.”

The Blues boss will likely take the chance to rest some big names for the remaining group games away in Sevilla and at home to Krasnodar. 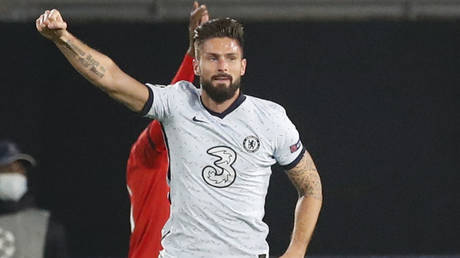