Cristiano Ronaldo is on the verge of setting another record in his remarkable career, standing one short of the 50-goal mark in Serie A following his previous prolific exploits in Spain’s Liga and the English Premier League.

The Juventus ace has his next chance to score his 50th Serie A goal when the league leaders visit eighth-placed Sassuolo tonight, where he will take on a side with a defensive record that is the joint-worst outside of the bottom five teams in the division.

No other player has ever scored at least 50 in the top flights in England, Spain and Italy, although Roma and former Wolfsburg and Manchester City striker Edin Dzeko reached the milestone in England, Germany and Italy.

Ronaldo scored 84 goals in 196 appearances at Manchester United between 2003 and 2009, requiring 194 matches to hit the 50-goal mark before moving to Madrid, where his tally of 311 goals in 292 matches was even more impressive.

During a nine-year stay in Madrid that included four UEFA Champions League trophies, Ronaldo needed just 54 games to reach 50 goals and scored at least 50 club goals in each calendar year between 2011 and 2015.

His highest total was in 2013, when 59 of his 69 goals came for Madrid, and the following summer he scored his 50th goal for Portugal in his 114th international match, netting in a 2-1 group stage win over Ghana at the 2014 World Cup.

He reached 50 goals in all competitions for Juventus in his 70th match at the start of February, meaning he just missed the record set by AC Milan and Ukraine legend Andriy Shevchenko, who needed 69 games to reach the total.

Had Ronaldo’s first season in Italy been as productive as his follow-up campaign, he would almost certainly have beaten the current Ukraine manager to the speed record for 50 goals.

The $117-million signing scored 21 goals in his Scudetto-winning debut Serie A season, leaving him fourth in the rankings for the season, five goals behind Sampdoria veteran Fabio Quagliarella.

Should he need any further incentive to reach 50, Ronaldo is currently a goal behind Lazio forward Ciro Immobile’s total of 29 in the race to finish top scorer in Serie A.

With six matches of the season remaining, Ronaldo will be favorite to finish ahead of the Italy frontman, who has failed to score as Lazio have lost their last three matches. 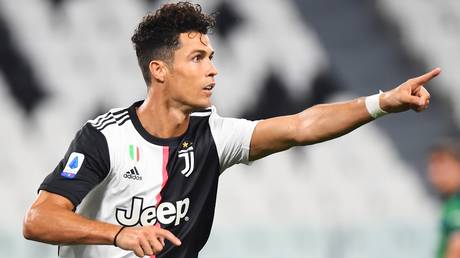