Tennis fans have reacted furiously after Germany’s Laura Siegemund did not own up to a double-bounce that was missed by umpire Eva Asderaki in her comeback win over Kristina Mladenovic at the French Open on Tuesday.

At set point with Mladenovic 5-1 up in the first-round contest, the German returned a drop shot that bounced twice rather than concede the point.

Siegemund saved a further six set points as she battled back to win the first set 7-5, before taking the second set 6-3 to advance to the second round at Roland Garros.

Fans were quick to react on social media, branding the 32-year-old a “cheater” and calling for her to be ejected from the tournament.

Laura Siegemund saved seven points to win the first set, 7-5, over Kiki Mladenovic, but did the German *truly* earn the comeback?

A missed call and lack of sportsmanship would suggest otherwise.

CHEATER. She don’t deserve to win that set. What a shame.

If Siegemund wins this set > ban the tournament @rolandgarros @EvaAsderaki

Siegemund has a reputation amongst tennis fans for skirting the line when it comes to sportsmanship.

Former player Anne Keothavong has taken issue with her use of medical time outs in the past, suggesting she calls for them unnecessarily in order to disrupt her opponents’ momentum.

Some fans weren’t surprised at her failure to admit the double-bounce.

“Why are people expecting Siegemund to do the sportsmanlike thing? It’s Siegemund, don’t be ridiculous guys,” wrote one Twitter user. “No surprise to see Laura Siegemund cheating,” added another.

Why are ppl expecting Siegemund to do the Sportsmanlike thing?
It’s Siegemund, don’t be ridiculous guys 😆

No surprise to see @laurasiegemund cheating.

Even tennis journalists were divided between giving her the benefit of the doubt and believing she was fully aware the double-bounce had occurred.

Possible though that Siegemund didn’t realise

Come on, it was so obvious that it’s impossible she didn’t notice. Impossible.

Siegemund will face either Julia Gorges or Alison Riske in the second round in Paris, while Mladenovic will be left wondering how she managed to lose the first set from such a commanding position even after the double-bounce. 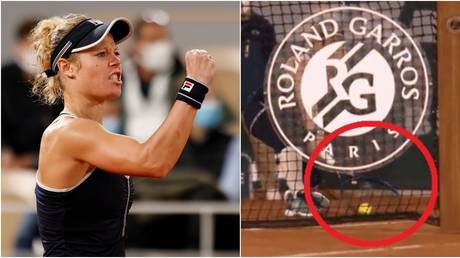 PS5 warning that only few game on...