‘Did they have any choice?’ Goalkeeping legend Peter Schmeichel says Denmark were threatened with forfeit after Eriksen nightmare

‘Did they have any choice?’ Goalkeeping legend Peter Schmeichel says Denmark were threatened with forfeit after Eriksen nightmare

Denmark legend Peter Schmeichel has claimed that Denmark were given the option of a 3-0 forfeit after Christian Eriksen collapsed on the pitch against Finland – and his son, Kasper, has spoken after visiting the star in hospital.

Former Euro winner Schmeichel was unimpressed by UEFA’s claim that the players wanted to carry on after Eriksen suffered a cardiac arrest, insisting that they were not given a choice.

The shaken Danes continued the clash later in the evening, losing their opening match 1-0 in an understandably out-of-form showing.

“I actually saw an official quote from UEFA yesterday saying that they were following the advice of the player, that the players insisted on playing – I know that not to be the truth,” the Manchester United icon told ITV.

“They were left with three options: one was to play immediately and get the last 50 minutes played.

“The next was to come in [on Sunday] at 12 noon and finish the 50 minutes and the third option was to forfeit the game, 3-0.

“So work it out for yourself. Is it the players’ wish to play? Did they have any choice really? I don’t think they had.”

Schmeichel’s illustrious son Kasper, who plays in goal for Denmark, has also been critical of the way the visibly upset players were treated – but has been overjoyed by a visit to see Eriksen.

“We’re still in the tournament,” he told DR. “Now we have to try to see if we can win this and do it for Christian and do it for all the fans who sat with us and were just as powerless in the situation as we were.

“I have no doubt that this team has the unity, the strength to be able to come together and go out and do something special.

“It was damn nice to see him smile and laugh and be himself and just feel that he is there. It was a great experience and something that has helped me a lot.” 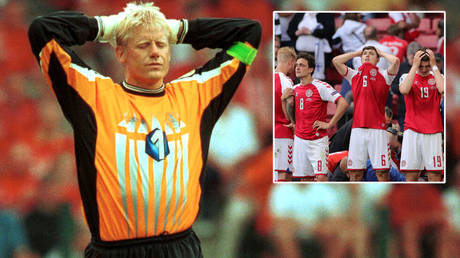