The lightweight clash between contenders Dustin Poirier and Dan Hooker captivated the MMA world on Saturday night, as a host of big-name UFC stars sent their congratulations to Poirier after his thrilling victory.

Former interim champion Poirier was the last man to challenge Khabib for the UFC lightweight title, but lost out to the undefeated Russian champion via third-round submission at UFC 242 in Abu Dhabi last September.

But, despite coming back from the longest layoff of his UFC career following that loss, Poirier looked in outstanding form as he and Hooker threw caution to the wind in one of the best fights seen so far in 2020.

Hooker appeared to settle the quicker and shaded the first two rounds of the matchup, but Poirier came powering back through the middle of the fight and passed the Kiwi on the scorecards in the championship rounds to score a hard-earned unanimous decision victory after a bruising encounter at the UFC Apex in Las Vegas.

Poirier’s performance earned the American deserved praise from everyone watching, including from Khabib himself, who took to Twitter as soon as the result was announced to congratulate his former foe.

DIAMONDS. ARE. FOREVER. 💎@DustinPoirier gets the UD victory in a back-and-forth battle for the ages! 🔥 #UFCVegas4 pic.twitter.com/FECvcnGfqx

Nurmagomedov’s congratulations were echoed by a host of other big-name UFC stars, including BMF champion Jorge Masvidal, who tweeted his belief that Poirier’s win over Hooker was 2020’s Fight of the Year so far.

Poirier’s hard-earned win also garnered praise from the hardest-hitting man in the UFC, heavyweight slugger Francis Ngannou, who hailed both men for their performances, calling them “savages.”

Great fight! FOTY Probably. I think @DustinPoirier got it #UFCVegas4

Congratulations to these two savages for a terrific fight!! 🔥🔥🔥#UFCVegas4

The victory means Poirier maintained his remarkable record of never having lost back-to-back fights in his 32-fight MMA career, and put him right back into the title conversation in the UFC’s exciting lightweight division.

Khabib looks set to put his 155-pound title on the line in September against recently-crowned interim champion Justin Gaethje, while former interim champ Tony Ferguson is still chasing that ever-elusive fight with “The Eagle” after FIVE bookings to fight the Russian all fell through due to illness, injury, weight-cutting issues, a freak accident and, most recently, the coronavirus pandemic.

Then, of course, there’s the ever-present threat of Irishman Conor McGregor who, despite announcing his retirement earlier during the pandemic, is a virtual cert to return if given an attractive enough matchup.

His stated aim at the start of the year was to get a rematch with Khabib, but despite a stunning 40-second finish of Donald Cerrone in a welterweight fight at UFC 246 in January, the Irishman has been unable to return to the cage due to the COVID-19 pandemic and has since announced his retirement – though few believe him.

It means Poirier probably will need one more big win to earn himself a rematch with Khabib, with potential matchups against Ferguson and McGregor looking the most viable as the fighter known as “The Diamond” showed he’s still very much in the mix in the UFC’s toughest weight class. 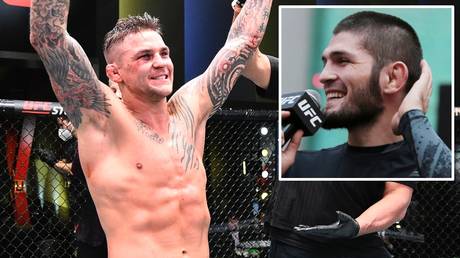 On song? Chelsea conductor Tho...