Bulgarian team Cherno More face a team selection nightmare for a match today, with 16 players and staff suffering from Covid-19 after they were infected by an opposition player who received a false test result from a laboratory.

Unsuspecting former Bulgaria youth international Martin Kavdanski thought he had tested negative for COVID-19 when he was given the all-clear to represent Tsarskoe Selo on Thursday.

He played 90 minutes as his side lost 4-1 at home to Cherno More in the First Professional Football League. But, disastrously for Cherno, their victory has now left them struggling to field a side for their Europa League play-off at home to Arda this afternoon, where they will be without 16 players and staff members after it emerged that Kavdanski’s test was a false negative.

Three other players from Selo were also confirmed as positive by new tests carried out after the match.

Having been unable to cancel or postpone the game, Cherno are at risk of a similar humiliation to the one suffered by Russian Premier League side Rostov last month.

When six players were ruled out after testing positive, opponents Sochi refused to reschedule their match, resulting in a 10-1 defeat for a heavily depleted Rostov side including 17-year-old goalkeeper Denis Popov, who emerged as a hero for saving a penalty and producing a string of saves behind a predominantly teenage lineup.

Varna-based Cherno have said they are willing to rely on junior players when they host Arda.

“Unfortunately the results found 16 positive samples,” Cherno said in a statement. “All players who tested positive are quarantined and we have taken the necessary precautions.

“We have notified the Bulgarian Football Union’s medical commission, as well as the sports and technical department. We are waiting for their instructions.”

Bulgaria has had nearly 6,000 confirmed Covid-19 cases to date, with 246 confirmed deaths. 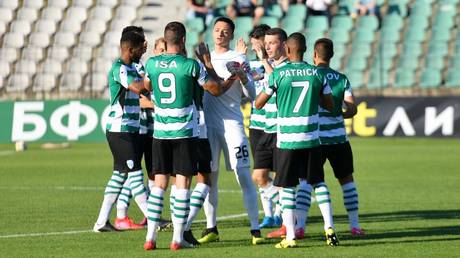