Denmark’s football team, who are in constant contact with Amnesty International, have said they are “very critical” of the decision to hold the World Cup 2022 in World Cup.

Simon Kjaer, the team captain who was recognized by UEFA as a hero last week for his part in saving Christian Eriksen’s life, has reiterated the squad’s opposition to the tournament taking place in Qatar, which has been at the center of allegations that thousands of migrant workers have died while working on the infrastructure for the finals.

Despite rebuking organizers over the scandal, Kjaer called potential qualification for the World Cup a “football party” for Danes and said that the players would let the Danish Football Association (DBU) take on the “political struggles” off the field.

“As captain, I must say that we players have not chosen the World Cup 2022 to be played in Qatar and we are very critical of the human rights conditions we see in the country,” the AC Milan defender told the association.

“Of course, we continue to fully and firmly support the DBU’s critical line towards Qatar.

“We players have several times publicly shown our position in relation to the World Cup in Qatar, but now we have to keep the focus on the game on the field – to qualify for that World Cup at all – and then let the DBU, as an organization, [deal with politics].”

Premier League stars including Chelsea players Antonio Rudiger and Kai Havertz lined up for Germany in shirts spelling out the words ‘human rights’ before a qualifier in March, and Norway – whose ranks include top striker Erling Haaland – also wore tops carrying a human rights message directed at leaders before one of their games.

Yet players and nations are yet to boycott the finals, with Norway voting against that move and Denmark using the pages on their website dedicated to the issue to insist that they will not snub the tournament.

Instead, Denmark have kept their action on the issue to meetings with FIFA, Amnesty International and “representatives of the World Cup organizers”, including “several critical letters” to the governing body.

“It is a controversial decision and there are still major challenges in the field of human rights among the World Cup hosts,” says DBU chairman Jesper Moller.

“Since 2015, the DBU has worked to create change in Qatar, in close co-operation with our Nordic colleagues and following advice from, among others, the trade union movement and Amnesty International.

“The DBU’s board and management are at the forefront of creating change in Qatar so players can focus on the game on the field. It is our management responsibility to continue the fight for better human rights in Qatar.”

In April, DBU CEO Jakob Jensen said that a newspaper article by a sports historian claiming that protests would not make any difference “jumped on easily-bought conclusions and points about citizen proposals and opinion polls about a boycott.”

“We have twice visited Qatar with our Nordic federal colleagues,” he said. “This has been done in collaboration with the trade union movement, the UN labor organization, the International Labour Organization and with advice from Amnesty in Denmark.

“During the visits, we have criticized the conditions vis-a-vis those in power in Qatar and met with the migrant workers it affects. When meeting with them outside the official program, the migrant workers ask us to maintain the criticism and come again.”

Jensen spoke of “horrific human rights violations”, reiterated that Denmark would not have voted in support of the World Cup, called for democracy reforms within FIFA and said that the Denmark team wearing ‘Football Supports Change’ t-shirts before matches is “a step in the right direction” – but he added that a boycott would not “create better conditions for migrant workers.”

“It puts greater pressure on fans, football associations and sports organizations,” he argued. “It is turning its back on the problems.

“When the pandemic allows, we will visit Qatar again, present our criticisms and put pressure on to change the situation for the better.”

Denmark’s players, who host Scotland on Wednesday, are being “constantly updated on the conditions in Qatar” by Amnesty International, the association said. 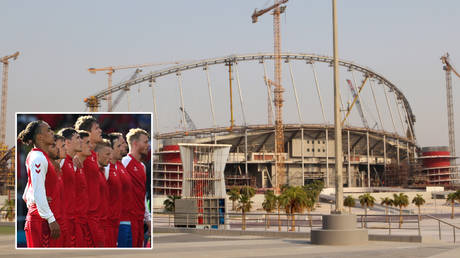 Why has TikTok banned the milk cra...