Close
Trending News
HomeSportDenis Shapovalov takes aim at the bubble, balls and tournament scheduling after CRASHING OUT of French Open

Denis Shapovalov takes aim at the bubble, balls and tournament scheduling after CRASHING OUT of French Open

Denis Shapovalov takes aim at the bubble, balls and tournament scheduling after CRASHING OUT of French Open

Canadian ninth seed Denis Shapovalov hit out at French Open organizers after his elimination from the men’s singles tournament as he criticized everything from the balls to the biosecure bubble to the schedule of the tournament.

And, after his singles involvement in the oft-criticized tournament came to an end on Thursday, Shapovalov took aim at the tournament’s administrators for failing to produce an environment and a tournament that gave the players the chance to compete at their best.

“Scheduling is absolutely awful,” said Shapovalov after his second-round exit.

“After a five-hour match, I have to play doubles now. It’s just like, it’s just complete trash scheduling. It’s disappointing.

“I mean, you’re in a Grand Slam and I don’t want to sound spoiled, but you expect at least some help from the tournament to help you compete.

“How am I supposed to come out and play doubles now after a five-hour match? It’s a first-round as well, they could have scheduled it way better.”

Shapovalov arrived at Roland Garros in solid form and had been earmarked as a potential dark horse for the tournament after breaking into the Top 10.

But he struggled to deal with the slow-playing court and the heavy tennis balls used at the tournament that have attracted criticism from a number of players.

“These conditions were completely stacked against me,” Shapovalov, who reached his first Grand Slam quarter-final at the recent US Open, said.

“It’s impossible to hit a winner with these balls. In my opinion, it shouldn’t be that heavy and that difficult.”

Shapovalov signed off by criticizing the bio-secure bubble which is meant to help prevent any COVID-19 infections.

“Honestly I think they’re not doing a good job. There’s really no bubble, especially in the second hotel, I heard,” he said.

“You can leave the hotel, you can go to the city, there’s no problem, there’s nobody stopping you. 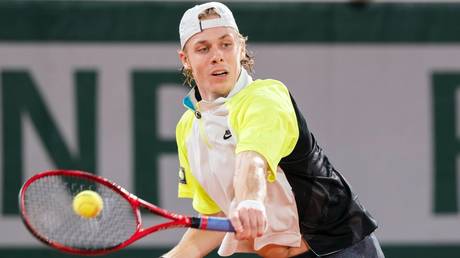