Close
Trending News
HomeSport‘Defenders kick the sh*t out of you and are built like wardrobes’: Higuain warns Messi about heading to England

‘Defenders kick the sh*t out of you and are built like wardrobes’: Higuain warns Messi about heading to England

‘Defenders kick the sh*t out of you and are built like wardrobes’: Higuain warns Messi about heading to England

Gonzalo Higuain has warned Argentina teammate Lionel Messi about swapping La Liga for the Premier League, with the Juventus forward cautioning that defenders in England “are built like wardrobes” and “kick the sh*t out of you.”

Messi is reportedly pondering a Nou Camp exit after suffering the humiliation of an 8-2 defeat to Bayern Munich in their Champions League quarterfinal – a result which has already claimed the scalps of manager Quique Setien and sporting director Eric Abidal.

Even at the age of 33, Messi would not be short of suitors should he finally call time on his career at Barcelona, with the likes of Manchester City touted as a possible location, where the Argentine could link up with former boss Pep Guardiola.

But one man with a warning about heading to England is Messi’s Argentina teammate Higuain, who spent the latter part of the 2018-19 season on loan at Chelsea from Juventus.

“I suffered a lot in the English league. I didn’t manage to adapt in six months,” Higuain told Fox Sports.

“It’s nothing like the Spanish League. The defenders kick the sh*t out of you and they don’t blow for free-kicks like they do in Spain.”

Despite the rigors of the Premier League and his own failure to make a significant mark at Chelsea – where he scored five times in 18 appearances – Higuain said he believed that such was Messi’s quality, he would still rise above any rough tactics from defenders.

“I don’t know how that would affect Messi. I don’t think he’d suffer, since he’s a player at another level,” said the Juventus forward.

Messi is said to be seriously contemplating walking away from the club he joined as a 13-year-old and where he has won four Champions League titles among a host of other accolades, as well as personal awards such as a record haul of six Ballons d’Or.

With rumors rife that Messi wants an exit, Higuain said he did not want to second-guess what his countryman was planning to do.

“I don’t know what Leo Messi might be thinking. I hope he decides what he feels will make him happy,” said Higuain.

“That’s the most important part of a decision. Do what makes you happy, not what will make others happy.”

The embarrassing defeat against Bayern compounded a miserable season for Barca and Messi in which they were beaten to the La Liga title by a resurgent Real Madrid.

The Catalan giants have now gone five years since their last Champions League triumph, and are reportedly set to turn to Dutch former defender Ronald Koeman to revive their fortunes. 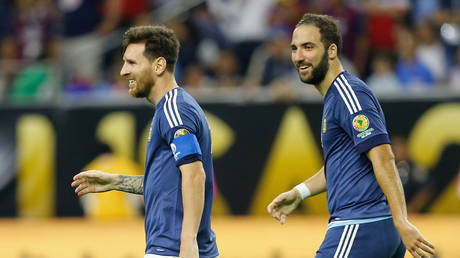