Los Angeles Lakers owner Jeanie Buss has publicly revealed hate mail accusing her of employing “traitorous and overpaid n*****s in the NBA”, and earned the backing of LeBron James for making the poisonous message public.

In a letter composed in a typewriter font on a grey background, Buss was addressed as “Dear b*tch” by a writer identifying themselves as Joe, introducing himself as a fan of 60 years.

Amid the Black Lives Matter protests that have been widespread across the US in recent weeks, the tone of the attack became even uglier from there.

“I’m saying to hell with these traitorous and overpaid n*****s in the NBA,” he thundered.

“Go to hell and meet Kobe Bryant there.”

Five-time NBA champion Bryant, who was known as the “Black Mamba” and died in a helicopter crash in January, spent the entirety of his 20-year career with the Lakers before retiring in 2016.

Two of the team’s current players, Dwight Howard and Avery Bradley, have been among those calling on the NBA to rethink plans to resume the season in favor of focusing on social justice and anti-racism campaigns.

Buss, who is thought to be worth around $500 million, said the letter showed that “hatred is real and it’s there, in the street.”

“This is happening in the world today,” she pointed out.

“It is real. It exists. Joe: did sending this letter make you feel better?

“Actually, all you did was waste your time, your energy and your stamps, but thank you for including your return home address.

“Why don’t you look at yourself in the mirror and see your ugliness? Because I refuse to.”

Her comeback received a rapturous reply from James, who told Buss that he loved her in a message in capital letters bookended by hearts.

“I have received messages like this for years and I have always chosen to ignore them,” added the owner who oversaw his signing in 2018.

“But not anymore. I ask my white friends to unite, face that in our country and in the world there is racism and pledge to stop ignoring it. We all have to be better.” 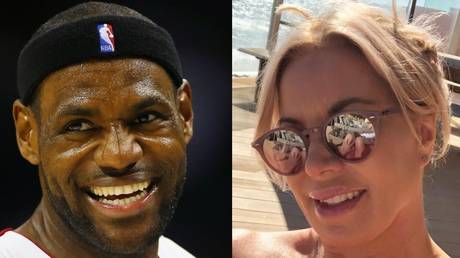 DOUBLES all round: Lewandowski bre...