Footage has emerged showing two dogs joining the action in a Deaf Olympics qualifiers between Ukraine and Italy – and the chaos continued as a horse cantered across the turf just minutes later.

The initial invasion took place in the 41st minute of the clash, when Ukraine were 2-0 up in the game played near Poltava on the Vorskla River in the central region of the country.

The playful pair then sped up as they headed towards the goal, paused to conspire among themselves and, eventually, responded to frantic instructions to leave the playing area by scampering off.

More animal interference was to play out during the second half. In the 59th minute, a grey and white horse casually trotted across the pitch near the halfway line.

A man gestured in vain to the majestic animal’s side as it made its way towards a dugout on the sideline.

Bystanders shot videos with their phones, leading to clips on social media that racked up thousands of views.

“When the horse came out, I just lost it,” said one viewer, while another respnded with an animation reading: “That is some next level sh*t.”

The horse is likely to be the largest animal to have invaded a pitch in recent times.

A cat has entered proceedings on more than one occasion at the Goodison Park home of Premier League side Everton, and there was much mirth – and a certain amount of alarm – when a snake turned up in the penalty area at a Russian Premier League game last month.

Pigeons have regularly caused interruptions during matches, featuring at German giants Borussia Dortmund and other clubs.

In perhaps the most terrifying animal appearance at a stadium in living memory, a cat had to be saved by fans carrying a flag when it plunged from an upper tier at a college football showdown in the US last month.

The feline dangled from the considerable height at Miami’s Hard Rock Stadium before tumbling towards the ground in a clip that was predictably immortalized on social media. 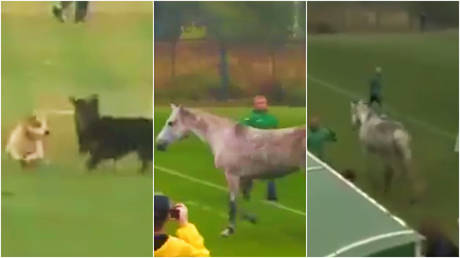