Quique Setien’s brief reign in charge of Barcelona has already been ended following the most humiliating night in the Spanish giants’ history, according to sources reporting that Xavi or Mauricio Pochettino could replace him.

Setien was a forlorn figure as Barca were crushed 8-2 by Bayern Munich in the quarter-finals at Lisbon’s Estadio da Luz, presiding over the worst defeat in Champions League history for the five-times winners of the tournament.

There had already been serious doubts over the 61-year-old’s future after he led Barcelona to a distant second in La Liga, dropping points in four of their final ten matches of the season as arch-rivals Real Madrid won the title and left them facing the prospect of a season without a trophy unless they pulled off an unlikely Champions League triumph.

Amid widespread rumors that his sacking was a formality in the aftermath of his catastrophic third Champions League match as a coach, journalist Fabrizio Romano told his social media following of more than 1.1 million that the decision to remove Setien had already been made.

“He’ll not be the manager next season,” added the transfer news expert.

“The club is also considering firing some directors in order to start a new chapter soon.”

Romano revealed that early betting favorite Xavi, who won the Champions League four times during a celebrated career at the club, and former Tottenham manager Mauricio Pochettino were being considered to succeed Setien, adding that a final decision would be made after imminent discussions.

Xavi is currently the manager of Qatar Stars League club Al Sadd, where he has been repeatedly linked with a move back to the club where he spent 18 years of his playing career.

Pochettino has been out of work since being sacked by Spurs in November, having overseen a debacle of his own against Bayern when the Premier League side were mauled 7-2 by the Bundesliga winners in a Champions League group stage game the previous month.

Setien replaced title-winning coach Ernesto Valverde in mid-January but Barcelona’s unsteady form worsened during his tenure, including dry spells for club legend and top scorer Lionel Messi, who had ominously warned that the team’s playing style would need to change if they were to have any chance of winning the Champions League.

Barcelona have already decided to sack Quique Setién after the terrible defeat against Bayern Münich. He’ll not be the manager on next season. 🔴🔵 @SkySport #Barcelona #FCB

Messi was among the scorers during a 3-1 win over Napoli to seal their progress to the quarter-finals last Saturday, only for the 2015 winners to utterly capitulate against rampant Bayern, conceding four in the opening 31 minutes and another four in less than half an hour during the second half.

That left Setien on the brink less than seven months into his two-and-a-half year contract, admitting that it was “clear” and “obvious” that the thrashing had damaged his credibility.

“I am aware of what a defeat of this nature entails,” the former Real Betis manager said.

“I think that right now it’s too soon to be talking about whether I stay at the club or not. The reality is that it doesn’t depend on me.

“It’s worth all of us working out what’s important and considering a wide range of things which correspond to a defeat of this importance and which is so painful.”

Unpopular club president Josep Maria Bartomeu and sporting director Eric Abidal are among those under threat, with long-serving defender Gerard Pique speaking of the need for change after what he described as a “rock bottom” night for his side.

“If Gerard says that it’s time for big changes, there’s going to be importance to his words,” admitted Setien.

“It’s time for us to review and take the decisions which are needed for the future.

“I’m not going to talk about what is needed at the club. I’ve been here for just a few months.”

Should Setien’s sacking be announced on Saturday, the move would provide the second high-profile managerial departure in a week as a result of a Champions League exit.

Maurizio Sarri was axed by Juventus last Saturday, having guided them to the Serie A title in Italy but suffered an away goals exit at home to Lyon in the round of 16 the previous evening. 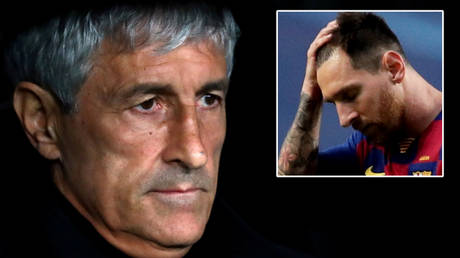 'Sancho staying is set in sto...