Danish professional cycling star Chris Anker Sorensen has died aged 37 after being hit by a van while out on a ride preparing for the upcoming Road World Championships, where he was working as a pundit.

Sorensen was in Flanders, Belgium, where the event which he was set to cover as a pundit is to be held from September 19 to 26.

Rushed to hospital, he later died from his injuries with an International Cycling Union spokesman dubbing his passing a “tragic loss”.

“Our thoughts are with his family, friends, and everyone at the Danish Cycling Federation,” a statement said.

A minute silence is taking place today ahead of the start of the Men Elite ITT, in memory of Chris Anker Sorensen who sadly passed away yesterday.

Sorensen was a revered commentator in his homeland, with TV2 Sport director Frederik Lauesen revealing that he received the news of “good colleague” Sorensen’s death “with great sadness”.

“Mr Sorensen was in Belgium for the World Cycling Championships,” Lauesen detailed.

“Today, Saturday, he was out cycling and was hit by a car, and he later died of his injuries.

“Our thoughts and deep sympathy go to Chris Anker Sorensen’s family,” it was concluded.

We are a good man down tonight. Former Danish Champion Chris Anker Sorensen has succumbed to injuries sustained after being hit by a car while riding. A pall of sadness will hang over the World’s this week. Think of him & those close to him… & stay safe yourself while you do

Race World Championship organizers said in a statement that Flanders 2021 and the UCI were “saddened by the news that former rider Chris Anker Sorensen has passed in a traffic accident.”

“Chris attended the 2021 UCI Road World Championships while working as an analyst for Danish television. Our thoughts and prayers are with his loved ones,” it concluded, while the UCI explained on their Twitter account that a minute’s silence would be held in his honor before racing on Sunday.

Sorensen stepped down from the sport three years ago, after a successful career that was mostly under the team Bjarne Riis banner.

A talented climber and stage racer, he memorably won stage 8 in the Giro d’Italia in a landmark victory and led Saxo Bank at the Tour de France in 2012 where he was given the Combativity Award. 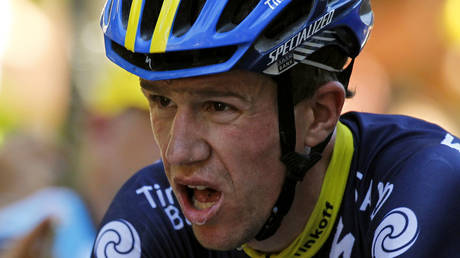