YouTuber and celebrity boxer Logan Paul has issued a groveling apology to Dana White and begged the UFC boss to “take me back”, insisting that he “loves” the UFC and does not echo inflammatory comments made by his brother, Jake.

Logan is set to take on 50-0 boxing legend Floyd Mayweather in an exhibition bout on Feb. 20, while his outspoken brother, Jake, has called out various fighters including Conor McGregor for future bouts after knocking out former NBA star Nate Robinson on the Mike Tyson vs. Roy Jones Jr. undercard last year.

Speaking during a UFC press conference, UFC boss White wasn’t overly impressed with what he sees from the Paul brothers, and he recently explained how their bouts are only for “people dumb enough to spend their money watching that sh*t.”

“Neither one of those guys can fight,” said White at the time.

“It’s all a big gimmick. Like I said in a press conference, there’s a market for that. If people are dumb enough to spend their money watching that sh*t, I don’t know what to tell you.

“Good luck to them. I (couldn’t) care less what that guy (does). I get it. He’s trying to make some money and is doing his thing. There are people who want to spend money on that. I’m not that guy.”

Since White’s comments, Logan has moved to try to get back into his good graces by issuing a groveling apology to the UFC boss.

Speaking on his podcast, Logan said that he’s being associated with comments made by his brother, and begged White not to tar him with the same brush.

“Now Dana has grouped us together, which sucks. I love Dana White. I love the UFC. Now Dana thinks we’re the same person.

“We’re so different. I love the UFC fights. I want to do a UFC fight one day. I’m not saying now, let me get my skills up.

“Dana, take me back! I’m not Jake! Please, bro, he’s given me tickets to go to UFC fights before. F*ck! F*ck! I love Conor McGregor, dude!” 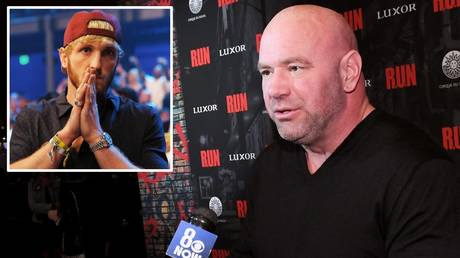 Why was PogChamp emote removed fro...