Luca Wackermann suffered multiple injuries, including a suspected broken back, during Tuesday’s fourth stage at the Giro d’Italia when the draft from a low-flying helicopter caused a barrier to come loose and strike two riders.

Italy’s Wackermann has withdrawn from the race after the bizarre incident which saw both he and Etienne van Empel of the Vini Zabu-KTM team involved in the major crash towards the end of the stage which left Wackerman with numerous injuries including a suspected fractured back, as well as concussion, a broken nose, multiple cuts to his face and significant bruising on his arms and legs.

“Wackermann will spend the night in the hospital kept under observation and losing that chance to live a dream vanished because of an episode that could have brought some heavier consequences,” a statement from the Italian team said.

“Wackermann was sent to the hospital, he was barely conscious,” team boss Andrea Citracca said to Italian television.

“The helicopter was flying too low, the movement of the air blew up the barriers. It is not clear if he has broken his pelvis. The barriers were not tied properly.”

I am okay. Only some small cuts on my fingers. Not really sure what happend but out of nowhere the barriers flew into our group. For now my thought are with my teammate Luca and hope some good news will arrive soon🤞#giro @ZabuBradoKTM pic.twitter.com/blR2o1Ncy7

Van Empel, meanwhile, was largely uninjured. France’s Arnaud Demare of Groupama-FDJ was unencumbered by the accidents as he claimed the win in the bunch sprint on the final day of race in Sicily.

The incident came after another strange accident which saw double Olympic gold winner Geraint Thomas suffer a broken pelvis after he crashed as he cycled over a water bottle which appeared to have been discarded by another rider – and, somewhat amazingly, the situation repeated itself when Dutchman Pieter Weening also struck a drinks bottle causing him to lose control of his bike and strike his head on the tarmac.

After being medically assessed, Weening was allowed to continue the race despite appearing visibly affected by the incident as he appeared confused attempting to locate the pedal of his bike as he mounted it.

The combination of incidents has led to criticism of the safety protocols in the Giro d’Italia as well as a wider debate as to how the sport of cycling deals with potential concussion injuries and comes after Romain Bardet finished stage 13 of the Tour de France with an injury later diagnosed as a bleed on the brain after a crash. 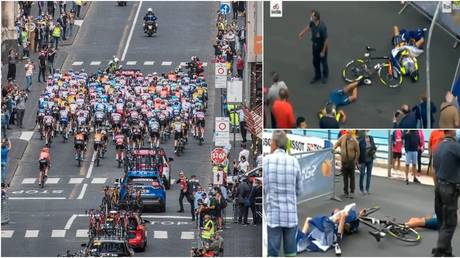