Katia Aveiro, the sister of football icon and Juventus winger Cristiano Ronaldo, has been hospitalised suffering from pneumonia after contracting Covid-19, despite earlier calling the disease “the biggest fraud I’ve ever seen”.

In an Instagram post published on Tuesday, Ms. Aveiro told how she tested positive on July 17 and had been recuperating at him in isolation, but then developed pneumonia and was hospitalised.

“[It’s/This is the] last type of post I would like to make, I tried not to do it in the last few days, but as news travels fast, and out of respect for those who follow me and care for me and mine, I will share the truth with you,” Aveiro said.

“I was caught by the damned [virus]. Since the 17th of July that I’ve been positive I’ve been in isolation and at home very well, [with a] few symptoms but sticking to the protocol as the rules dictate, everyone at home got it except for my mother (thank God).

“The videos that I posted in the street were already made before I tested positive (a clear example that on this side they only know a few things about the real truth of the internet, or rather don’t believe in everything) unfortunately since the 23rd I got worse (the only one who weakened {smiley} right away, me, the strongest and the cook [too], of all those tested at home).

“I got pneumonia as a result of the damn virus, in short, I was admitted to hospital and here I am, following everything properly, recuperating thanks to God and thanks to this service from Sesaram (at Funchal Hospital) with a marvelous medical team (young mostly but craques [stars]) and with an incredible story to tell.

“I carry on with the same thoughts and the same beliefs, it’s not a damn virus planted by the greed of this world that will knock me down, and the irony of fate I came to find in this little corner of heaven, which is my land.”

The 43-year-old, whose full name is Liliana Cátia Pereira Santos Aveiro but performed as a singer under the stage name ‘Ronalda’, in a nod to her famous brother, previously called the disease the “biggest fraud” she’s ever seen.

Ronaldo previously contracted the disease at the height of the pandemic in Italy while with Juventus, but remained asymptomatic and continued training at home in isolation.

“I believe that, today, thousands of people who have come to believe so much in this pandemic, in the tests and the measures taken will, like me, see it is the biggest fraud I’ve seen since I was born,” she had written in October.

“A phrase that I read today and that I stood up to applaud: ‘Enough fooling the entire world’. Someone, open your eyes, please.”

Now bed-ridden, Aveiro says she won’t let the disease beat her, and hinted she may record a video diary of her experiences with battling the disease.

“Yes my people, it is an example that what remains in life that we have the most for certain is the love for our people, for our beliefs, and the desire to be happy with them and to do what we love.

“Who knows [maybe] I’ll keep a diary of day to day life here if my condition and patience allow it, but everything is alright in truth, I’m reacting well, I have visible improvements with each passing day and best of all I’m losing weight that I had already gained in these troubled holidays not everything is bad. And my family is always there for me.

Aveiro has since shared stories of her enjoying donuts in her hospital bed and FaceTiming her daughter, and signed off the post with well wishes and advice for her 1.2 million followers to look after their health, but stopped short of encouraging others to get vaccinated to prevent a repeat of her own misfortune.

“As for the rest, I will let you know here and only myself in the first person. I love you, take care of yourself folks, vitamins, happiness, peace and will to live, the immune system thanks you and stops/prevents so much. Believe me.” 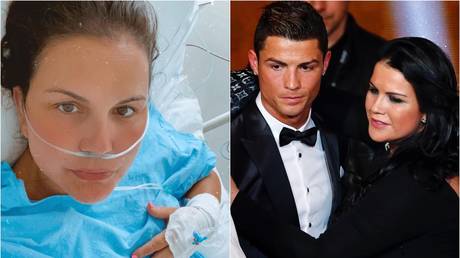