Cristiano Ronaldo’s son is in hot water after footage surfaced of the youngster illegally riding a jet ski alone while on holiday with his grandmother in his dad’s hometown of Madeira, Portugal, triggering a police investigation.

In a video uploaded and since deleted from Instagram by his aunt Elma, sister of the five-time world’s best player, the 10-year-old can be seen taking the jet ski for a spin in Paul do Mar off the south coast of Madeira, where he is currently holidaying with relatives including Cristiano Sr’s mother Dolores Aveiro.

Operating a jet ski without a proper license is an offence under law on the Iberian peninsula and on its autonomous island of Madeira, situated off the Northwestern coast of Africa.

A report published in The Sun stated that Maritime Police chief Guerreiro Cardoso confirmed on Monday that an investigation into the video was underway.

Speaking to Portuguese newspaper Expresso, Cardoso confirmed that the footage video was brought to police attention after which they decided to probe whether to fine Ronaldo Jr. and are investigating who the vehicle belongs to.

Cristiano Sr. is currently on holiday at a different, unknown location with his 3-year-old son Mateo and Spanish girlfriend Georgina Rodriguez.

Doting dad Ronaldo has often been snapped on holiday with Cristiano Jr. teaching his lad to dive by waiting in the water for the youngster to hurl himself off the side of a luxury yacht.

But had the jet ski incident happened if Ronaldo was present is a different matter and, despite also sharing the video from his sister on Instagram, the Juventus winger will surely have some choice words for the family who allowed his eldest son to become part f a police investigation. 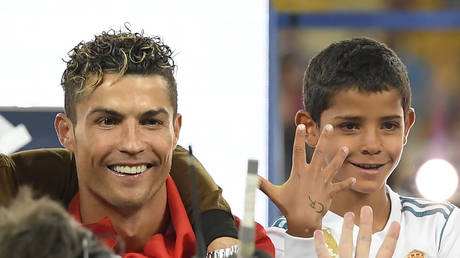