Football superstar Cristiano Ronaldo was among those to praise Khabib Nurmagomedov after the UFC lightweight champion announced his retirement following his victory against Justin Gaethje.

Khabib broke down in tears after submitting interim champion Gaethje in the second round of their main event contest on Fight Island in Abu Dhabi, in what was the Dagestani star’s first appearance in the octagon since the death of his father and trainer Abdulmanap in July from complications stemming from a coronavirus infection.

An emotional Khabib – who improved his perfect professional record to 29-0 with the victory – said he had promised his family that the contest against Gaethje would be his last.

The news prompted a massive outpouring of praise and respect on social media from MMA fans and beyond – including Portuguese football star Ronaldo.

“Congrats bro! Your father is proud of you,” wrote the Juventus forward in a message on his Instagram stories, sharing a TV image of an overwhelmed Khabib immediately after his victory.

Khabib is a huge football fan and has previously met Ronaldo, also revealing before his fight with Gaethje that he remained in contact with the five-time Ballon d’Or winner, as well as with another football icon, Zlatan Ibrahimovic.

Before UFC 254, Ronaldo had tipped Khabib to win, also calling him “his brother” on that occasion.

In an interview with BT Sport in the build-up to UFC 254, Khabib said he was planning to take time off afterwards to visit England and watch some Premier League matches, while he has previously been spotted in the stands at games in his native Russia as well as at the likes of French champions PSG.

Now that he has called time on his stellar career in the cage, Khabib may have even more time to indulge in his passion for the ‘beautiful game’. 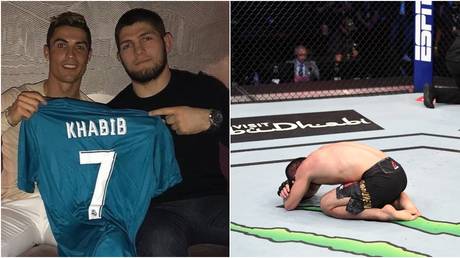