Cristiano Ronaldo struck a stunning long-range goal as Juventus maintained their charge towards a ninth straight Serie A title with a 3-1 victory over Genoa.

The Portuguese star scored his 24th league goal of the campaign when he rifled in an unstoppable drive into the top corner from 25 yards out to put Juve 2-0 up in the 56th minute of the match.

The goal was wedged between two equally glorious strikes from Argentine hitman Paulo Dybala, who had put his team in front six minutes earlier with a superb solo strike from inside the box, and Brazilian Douglas Costa, who curled in a sumptuous effort from outside the box to put Juve 3-0 ahead on 73 minutes.

WHAT A GOAL CRISTIANO RONALDO 🤯 pic.twitter.com/xs1IET2d2y

While Andrea Pinamonti pulled a goal back for the hosts, it was a comfortable night for league leaders Juventus as they restored their lead over Lazio at the top of the table to four points with nine games to play.

Ronaldo had appeared sluggish in Juve’s opening games since returning from the coronavirus-enforced break, but now appears to be finding his form again with goals in each of his past three games.

“Something has changed in terms of movements, but they have learned to look for each other more often,” Sarri said after the win against Genoa.

“They have realized that by benefitting from each other, both reap the rewards. It’s something I have noticed in training too.”

Ronaldo now has 28 goals in 37 matches across all competitions for Juventus this season, as they chase a ninth successive Scudetto and aim to end more than two decades of hurt in the Champions League.

Next up for Sarri’s team is a home game against Torino on Saturday, before they travel to AC Milan on Tuesday. They host Lazio in a potentially decisive clash on July 20. 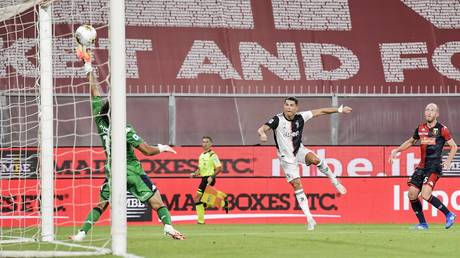