Football legend Cristiano Ronaldo has sent football fans into hysterics after distancing himself from bottles of Coca-Cola at a pre-match press conference ahead of defending champions Portugal’s Euro 2020 opener against Hungary.

In a viral clip that has been watched more than 800,000 times, the Juventus forward sits down next to the Portugal national team’s press officer in readiness for questions from reporters.

Noticing two bottles of the soft drink in front of him, he grimaces and rocks back in his chair, wondering what to do.

Wasting no time, the five-time Ballon d’Or winner then moves the offending items out of shot and shows a preference for water by taking a bottle of it and saying its Portuguese name, “agua”, before muttering “Coca-Cola” to himself.

Cristiano Ronaldo was angry because they put Coca Cola in front of him at the Portugal press conference, instead of water! 😂

He moved them and said “Drink water” 😆pic.twitter.com/U1aJg9PcXq

Opinion was dived among fans over whether the 36-year-old icon had done the right thing.

Some considered his intervention a show of disrespect for one of the tournament’s main sponsors, warning that he “shouldn’t have done that”, while others suggested the captain may have acted merely because the drinks giant is not on the list of his many sponsors.

He shouldn’t have done that. Coca cola could be one of the sponsors of the tournament. What he could have done is to bring the bottle of water closer to him, that’s all!

“What did Ronaldo do?” asked one of his fans. “He moved what he didn’t want to the other end from his private space.

“It’s his right and he isn’t an ambassador for any soda [drink].”

“He’s not an advocate for soft/fizzy/soda drinks so he moved it to the other end [of the table],” said another. “[It’s] not like he trashed them. The water is still [a] product of the Coca-Cola brand.”

Ronaldo just promoted this guy out of no where 😂 pic.twitter.com/cpjuGyrL1e

“Many are very concentrated on how important it is that Coca-Cola is sponsoring this tournament, but disregard the fact that sugary drinks contribute to diabetes and many other diseases in young kids,” another pointed out.

“Ronaldo is a role model and many will follow his example.”

Whatever his true motives for the decision, the incident has seen the re-emergence of quotes from last year when Ronaldo spoke of the footballing prospects of his son, Cristiano Jr, and his irritation with the youngster’s diet.

“We’ll see if my son will become a great footballer,” he remarked at the Global Soccer Awards.

“Sometimes he drinks coke and eats crisps and it irritates me. He knows that.

“Sometimes I tell my son to take a dip in cold water to recover after a run on the treadmill and he says, ‘Dad, it’s so cold there’. That’s fine – he is only 10 years old.”

🗣 “The crucial thing now is the Euros”

Cristiano Ronaldo says speculation surrounding whether he will leave Juventus in this summer transfer window will not affect his performances for Portugal. pic.twitter.com/BrizAPa88T

An anti-obesity boss also endorsed Ronaldo. “Junk food brands pay millions to sponsor high profile sporting events like the Euros, to keep their unhealthy products in the spotlight and to create a ‘halo effect’ by associating them with sport,” said Caroline Cerny, the Alliance Lead at the UK’s Obesity Health Alliance, speaking to Telegraph Sport.

“It’s great to see a role model like Cristiano Ronaldo reject Coca-Cola for water, setting a positive example for young fans and showing his disdain for a cynical marketing attempt to link him with a sugary drink.”

The ex-Manchester United star was probed on his future with an exit from Juventus and a return to his old employer possible.

“I have been playing at the highest level for many years. This doesn’t faze me. Maybe if I was 18 or 19, I might have had some sleepless nights, but I’m 36. Whatever comes will be for the best, regardless of staying at Juve or being transfered,” he stated.

“The crucial thing now is the Euros. It is my fifth Euros but, for me, it’s like my first Euros. We want to play well from the first to the last match.”

Ronaldo needs one goal at the tournament to break Michel Platini’s scoring record of nine Euro goals. He will also become the first player to feature in five editions of the final tournament on Wednesday. 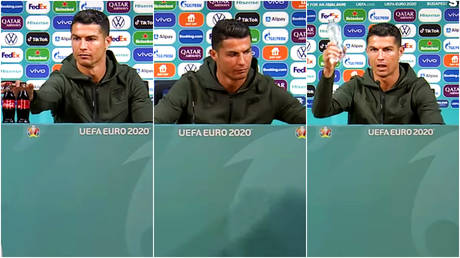