Juventus and Portugal star Cristiano Ronaldo has posted a heartfelt message after the death of Argentina icon Diego Maradona, bidding farewell to a man he called “a friend” and hailing the legacy he leaves behind.

The football world was left stunned on Wednesday after the news broke in Argentina that World Cup winner Maradona had died after suffering a heart attack at his home in Tigre, just north of Buenos Aires.

Tributes soon poured in from friends, former rivals and footballers of all generations to a man widely considered as one of – if not the – greatest players ever to grace the game.

“Today I say goodbye to a friend and the world says goodbye to an eternal genius,” wrote the 35-year-old Portugal star, sharing a picture of himself smiling alongside Maradona.

“One of the best ever. An unparalleled magician. He leaves too soon, but leaves a legacy without limits and a void that will never be filled.

“Rest in peace, ace. You will never be forgotten.”

Ronaldo’s tribute was one of millions from all around the world to a mercurial genius who captivated for his brilliance on the pitch and also burnished his legend with a colorful lifestyle off it.

Brazilian great Pele, who often vies with Maradona for the label of the greatest of all time, also shared a touching message.

“Certainly one day we’ll kick a ball together in the sky above,” wrote the 80-year-old icon. 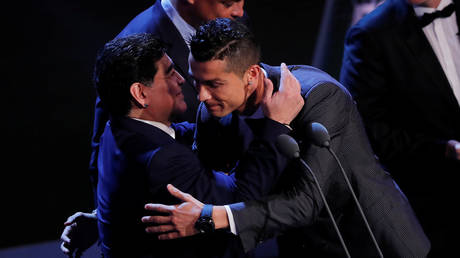