Cristiano Ronaldo moved level with Lionel Messi on a record 70 Champions League goals at home stadiums as the Portuguese scored a rasping equalizer for Juventus against Hungarian underdogs Ferencvaros.

The visitors had taken a shock lead in the 19th minute in Turin when Albanian winger Myrto Uzuni poked home a volley, then cheekily pulling out CR7’s own ‘Sii’ celebration on the Portuguese star’s home turf.

Ronaldo then had a goal disallowed for offside, before leaving no doubt about his strike in the 35th minute when he cut inside from the right flank before firing a rasping low drive from the edge of the box past Denes Dibusz and into the Ferencvaros goal to level the scores.

CRISTIANO RONALDO WHAT A GOAL pic.twitter.com/lQ5nHw5QlS

It moved the 35-year-old star to 70 goals in Champions League home games – a record stat he shares with perennial rival Messi.

70 – #CristianoRonaldo has scored 70 goals in Champions League home games: a joint-record for home goals in the history of the competition, level with Lionel Messi. Monsters.#ChampionsLeague #UCL pic.twitter.com/uU0HzYm1LI

Ronaldo’s home strikes in Europe’s premier club competition have come across his spells at Manchester United, Real Madrid and now Juventus – while one-club-man Messi’s have all come at Barcelona’s Nou Camp home.

The goal was Ronaldo’s first in this season’s Champions League and also meant he has netted in 15 consecutive editions of the competition – one behind Messi’s record of 16.

The Portuguese forward extended his record as the competition’s all-time top scorer on 131 goals – moving him 13 ahead of Messi, who was rested for Barcelona’s trip to Ukraine to face Dynamo Kiev, also in Group G.

The goal put Ronaldo on a remarkable 37 finishes in the calendar year, as the prolific five-time Ballon d’Or winner shows little sign of slowing down.

Andrea Pirlo’s Juventus next host Kiev in the competition, before a trip to Barcelona as Ronaldo will have the chance to line up against longtime rival Messi – having been deprived of that chance in the first game in Turin after testing positive for Covid-19. 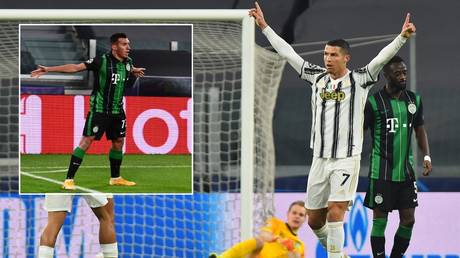