Brazilian fighter Polyana Viana generated headlines across the globe when she fought off a would-be mugger last year but faces another type of fight entirely this weekend when she battles for her UFC future against Emily Whitmire.

Strawweight Viana, 28, made a successful start to her UFC career in February 2018, submitting Maia Stevenson with a first-round rear-naked choke to take her career ledger to an impressive 10-1 at the time.

However, Viana has struggled since. Three successive losses – including a submission defeat against Veronica Macedo in her most recent fight a year ago – has left her UFC future hanging by a thread, but she will have a chance to place her career on solid ground with a win against the 4-3 Whitmire in Las Vegas on Saturday night.

Whitmire, meanwhile, has impressed in recent wins against Aleksandra Albu and Jamie Moyle but was beaten in her last fight by the impressive Amanda Ribas, who submitted the Portland native in the second round of their fight last summer.

The two were originally scheduled to fight in March of this year but Whitmire missed weight on the eve of the contest. The fight was subsequently cancelled the next day.

Viana will bring a four-inch reach advantage with her into the cage which should be enough for her to claim ascendancy against Whitmire, but both fighters are more known for their grappling prowess than their concussive knockout power – though there is at least one Brazilian criminal who might disagree with that assertion.

The Brazilian was hailed by Dana White last year for standing up to a thief in Rio de Janeiro, with the UFC boss sharing an image of Viana along with the swollen face of the man who tried to rob her.

“I felt it was cool to show women that we are able to defend ourselves, but I also faced a lot of criticism,” Viana told CNN at the time.

“I ignored most of it, it was my life that was in danger and I feel like I did the right thing. Doing the right or the wrong thing, there will always be criticism. Overall, all the attention was really good for me.”

And she will, you feel, have even more eyes on her if she returns to winning ways against Whitmire this weekend. 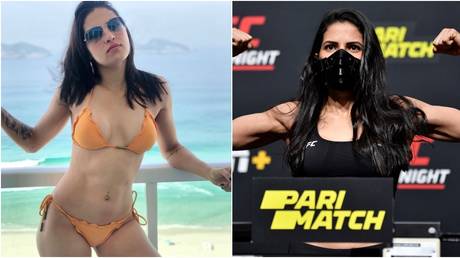