Unlucky cricket player Asif Ali experienced the full range of emotions when he smashed a sensational six – only to have his head in hands moments later after the ball smashed through his own car’s windscreen.

Ali hit the spectacular shot while playing for club team Illingworth St Mary’s, but any joy he had quickly turned to misery after a loud smash was overheard, with the camera soon revealing that his ball had broken a car windscreen in a nearby carpark – and his anguish was compounded when he realized that the car was in fact his.

He soon put his hands to his head while several other players displayed their shock before the reactions melted away into fits of laughter on the crease.

A tweet from the Illingworth club showing the shot – as well as the destroyed window on Ali’s Vauxhall Zafira – has since gone viral, earning 3,000 retweets and nearly 12,000 likes.

🔊 Sound on to hear the smash 💥 pic.twitter.com/FNjRMic9U5

“I have been playing for this club for a long time but never have I brought my car in the car park, it’s always parked outside,” he said.

Club chairman Jeremy Rhodes came to the rescue, however, and vowed to pay for any damage Ali did to his car, which he uses as his method of employment as a taxi driver.

“It was only appropriate: he scores a lot of runs for us and puts a lot of effort in,” Rhodes later said.

I’ve actually done that in a game. Not only that, it was a mate’s car & he gave me a lift to the game. Amazingly, I still got a lift home too but it was a fair bit more breezy on the way home. 🤣🤣🤣🤣

Rookie mistake, always park with the windscreen facing the pitch 🤣🤣🤣

if your gonna a 6, make sure it’s into your own car!

“I’ve actually done that in a game,” said one cricket fan in response to the footage. “Not only that, it was a mate’s car and he gave me a lift to the game. Amazingly, I still got a lift home too – but it was a fair bit more breezy on the way home.”

“If you’re going to (hit) a six, make sure it’s into your own car,” added another, while a third joked that it was a “rookie mistake” and that he should have parked with his windscreen facing the pitch.

But perhaps the best comment as attributed to an unnamed spectator at the game who is said to have shouted out: “Asif, please can we have your keys so that we can open your car and get the ball back?“ 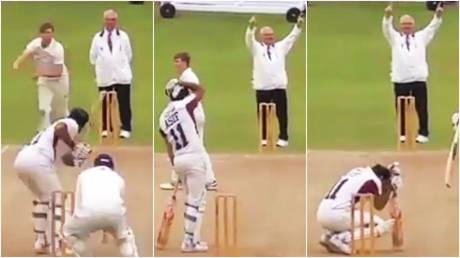