Indian cricket captain Virat Kohli has slammed racial abuse directed at teammates Mohammed Siraj and Jasprit Bumrah, who were allegedly referred to as “brown dog” and “big monkey” by sections of Australian supporters.

Kohli, who is home in India on paternity leave, described the actions of Australian fans as “the peak of rowdy behavior” after six fans were ejected from the stadium on day four of the test in Sydney between the two countries, with the Indian skipper demanding the stern action be taken against the offenders.

This came a day after India lodged a formal complaint due to insults they say were being hurled at them from the stands. Play was held up for 10 minutes while police escorted the offending fans from the stadium – which was at just 25 percent capacity due to restrictions in place due to the Covid-19 pandemic.

The incident needs to be looked at with absolute urgency and seriousness and strict action against the offenders should set things straight for once.

“Racial abuse is absolutely unacceptable,” Kohli tweeted. “Having gone through many incidents of really pathetic things said on the boundary lines, this is the absolute peak of rowdy behaviour. It’s sad to see this happen on the field.

“The incident needs to be looked at with absolute urgency and seriousness and strict action against the offenders should set things straight for once.”

Cricket Australia, for their part, have stated that they intend to conduct a full investigation into the issue, with the incident also expected to be referenced in ICC referee David Bunn’s report.

We have launched an investigation in parallel with NSW Police following a crowd incident at the SCG today. Full statement 👇 pic.twitter.com/D7Qu3SenHo

For Kohli, this has been a repeating issue. Back in 2011, he was the subject of criticism after he was seen giving the middle finger to the Australian crowd after claiming to have been continually abused by fans on the boundary lines.

These allegations were matched by veteran bowler Harbhajan Singh who also took to Twitter to detail instances of racial abuse he says he has received from Australian supporters.

I personally have heard many things on the field while playing in Australia about Me My religion My colour and much more..This isn’t the first time the crowd is doing this nonsense..How do u stop them ?? #AUSvIND

“I personally have heard many things on the field while playing in Australia about Me My religion My colour and much more,” he wrote. “This isn’t the first time the crowd is doing this nonsense..How do u stop them?“

The torrent of allegations has led to England’s Monty Panesar calling on the ICC to implement a defined set of rules to govern instances of racial abuse, writing: “A racial code of ethics should be established by [The ICC] to give clear understanding to spectators what is a racist term and what isn’t.”

Sean Carroll, Cricket Australia’s head of integrity and security, described the alleged incident as “regrettable” and issued a full apology to the Indian team.

“It is most regrettable that an otherwise excellent Test match contested in tremendous spirit by two friendly rivals has been tarnished by the actions of a small number of spectators over the past two days,” Carroll said in a statement.

“As hosts, we once again apologize to the Indian team.” 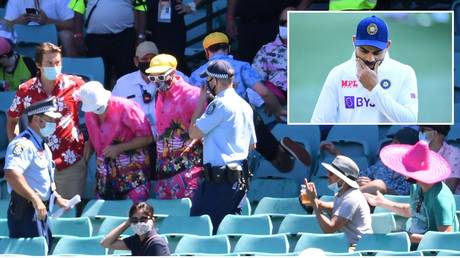