The first big UFC Fight Island show has already suffered a major blow with the news that the main event bout between Kamaru Usman and Gilbert Burns is off due to the Brazilian testing positive for COVID-19.

US-based MMA outlet MMA Junkie received information from multiple sources late Friday night confirming that Burns had been removed from his main event fight with Usman at UFC 251 on Jul 11.

The pair were due to do battle for Usman’s UFC welterweight title on Yas Island, Abu Dhabi, but Burns’ positive test has meant he will be removed from the card. The tests were conducted in the United States and the results meant Burns and his two cornermen did not board the UFC’s charter flight from Las Vegas on Friday.

Burns later revealed the news via his Instagram page, saying, “Devastating news, not feeling well but I’m going to win this battle! Stay safe out there! Much love.”

It is unclear what will happen with Usman, but his continued participation would be dependent on the UFC finding a suitable contender willing to step in to face the champion on just one week’s notice.

That contender would also have to be subjected to the battery of COVID tests required of all UFC athletes and staff making the trip to Abu Dhabi.

In the meantime, the UFC featherweight title rematch between current champion Alexander Volkanovski and former champion Max Holloway is set to form the new main event for UFC 251.

The bantamweight title fight between Jose Aldo and Russia’s Petr Yan may also be moved up to the co-main event slot as the pair do battle for the vacant title.

In addition to Burns’ withdrawal, it was also reported by MMA Junkie that the July 15 Fight Island bout between former strawweight champion Carla Esparza and rising contender Marina Rodriguez has been scrapped after Rodriquez’s cornerman tested positive for COVID-19.

Neither fighter tested positive, but due to a close-proximity member of Rodriguez’s team testing positive, the bout was removed from the card for precautionary reasons. 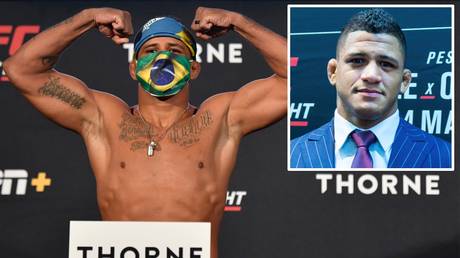 Local election 2021 candidates: Who is standing in my area?

Polling station pencils: Why don’t we use pens and should I take my own?