US Olympic gymnastics legend Simone Biles has been praised for looking “incredible” as she graced the cover of Vogue magazine, but it seems some people are just never satisfied in these times of uber-twitchy justice warriors.

At the age of just 23, Biles is already a four-time Olympic champion and has a staggering tally of 30 Olympic and World Championship medals to her name, establishing herself as among America’s most decorated athletes of all time.

Her popularity has been further burnished by her appearance on the cover of the August edition of fashion bible Vogue, in which Biles has also been praised for opening up about the sexual assault scandal involving disgraced US team doctor Larry Nassar.

.@Simone_Biles stars on the cover of our August issue! With the 2020 Olympics postponed and a shadow hung over American gymnastics, Biles–who is widely regarded as the greatest gymnast of all time—has had to be resilient as never before. (1/5) https://t.co/fPoNKoDNwD pic.twitter.com/6y4RxtMYAf

But while many responded with praise to Biles’ maiden cover appearance in the magazine (one outlet said she looked “incredible”), others were left nonplussed by the images and the woman behind the lens – renowned American photographer Annie Leibovitz.

“I hate these photos. I hate the toning, I hate how predictable they are, I hate the social crop here (wtf?) and I super hate that Vogue couldn’t be bothered to hire a Black photographer,” ranted New York Times picture editor Morrigan McCarthy.

I adore Simone Biles and am thrilled she’s on this cover… but I hate these photos. I hate the toning, I hate how predictable they are, I hate the social crop here (wtf?) and I super hate that Vogue couldn’t be bothered to hire a Black photographer. https://t.co/az0gLugdzS

Similar sentiments came from elsewhere, with Leibovitz having the audacity of being a white photographer taking photos of a black cover model, and standing accused of having a poor track record with darker-skinned muses.

You could have hired a black photographer. As much as I honor .@annieleibovitz this was a monumental opportunity for you guys.

After all the Black talent jumping out with #VogueChallenge, Vogue couldn’t idk hire a Black photographer to shoot this cover of Simone Biles? https://t.co/6N5Oac56Su

Because this photographer has a record of photographing people with darker skin tones badly.

Not to be outdone, some disgruntled Twitterati justice warriors even went as far as to claim that Leibovitz had a “colonizer’s gaze.”

These photos are bad. Simone Biles is gorgeous — the photographer has a colonizer’s gaze and I hate it

Balance was restored in some part by those questioning why the color of the photographer should be a point of contention at all, with others praising the magazine for choosing Biles as an ideal role model for the cover.

What qualification is skin color when hiring a photographer? The color of a person’s skin should not matter for any job.

Thank god y’all are putting women on your cover who DESERVE to be there. Strong, self made, healthy, inspirational, smart women.

Leibovitz’s credentials down the years include photographing some of the world’s most famous and powerful, with the likes of Queen Elizabeth II (who infamously scolded her during the shoot) and the official American First Family portrait of the Obamas back in 2009.

However, she was at the center of a race row back in 2008 for a cover shoot also for Vogue, on that occasion involving basketball megastar LeBron James.

James, the first black man to appear on the cover of the US edition of the magazine, was pictured holding Brazilian model Gisele Bundchen in a picture some likened to movie character King Kong holding white damsel in distress Fay Wray in the original 1933 movie.

Vogue U.S April 2008, starring LeBron James and Gisele Bündchen. LeBron became the first black man to appear on the cover of Vogue U.S. Many found it racist due to its resemblance to an old poster of King Kong and captive Fay Wray. pic.twitter.com/u57qhJahEo

James later dismissed the row, saying he was “just showing a little emotion.”

Biles’ own appearance as a Vogue cover girl has gone viral, with the athlete herself retweeting one post which racked up more than 150,000 ‘likes’, suggesting large numbers of people were at least pleased with the outcome.

Simone Biles on the August issue of VOGUE!!! 🙌🏾💕 pic.twitter.com/XrjWGOnRYG 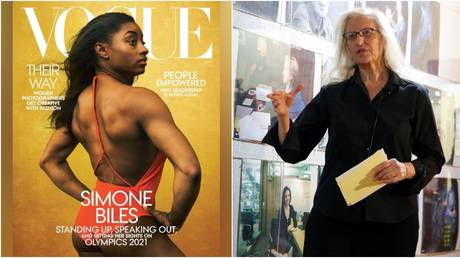