After posting videos of herself disarming and fending off a trainer who held a gun to her throat during a krav maga session, UFC starlet Mariya Agapova has thrilled fans with her first full fashion shoot in several skimpy outfits.

Agapova’s Instagram following of more than 35,000 might not have expected a fashion shoot to follow a series of clips of her learning how to disarm a trainer holding a gun as she enjoyed a tense krav maga session in a gym.

Shortly after showing her supporters how to turn the tables on an attacker holding a weapon to her throat, Agapova posed for “a couple more looks” at her Florida base, starting with a black corset and matching pair of shorts.

The 23-year-old prospect, who made an impressive UFC debut when she submitted Hannah Cifers via rear-naked choke in Las Vegas last month, has occasionally demonstrated her taste for all-black, rock-style outfits on social media in the past.

This time, she crouched in front of a staircase with her hair styled, showing off a series of eye-catching tattoos on her chest, left arm and left leg.

She then changed into another black ensemble of a small top, skintight shiny trousers and gothic platform boots with straps, placing her hands on her knees and throwing her head up to happily pout at the camera.

The former Invicta fighter stood over the camera next to a fishtank as she then donned her corset, shorts and boots again, combining them with stockings and straps on her legs before covering up to wear a floaty dress and shawl in her favorite color.

Agapova’s final look comprised cut-off shorts and a top with a shiny chain attached to it, exposing a belly button piercing and the fighter’s toned abdominal muscles.

“Let’s go, champ,” responded Bellator fighter Sidney Outlaw. “I’m happy for you from the bottom to the top.”

“Could you be any hotter?” asked an excited fan, telling Agapova: “Future champ.”

Agapova and her followers enjoyed her treatment of a potential shooter as much as her fashion shoot.

In the clips from the gym, which also revealed a tattoo on her right arm, the masked fighter initially looked concerned as a male trainer in combat trousers pinned her against the wall while holding a gun.

Agapova calmly used a krav maga technique to snatch the weapon, grinning with satisfaction as she pointed it at her assailant.

She repeated the trick when her coach held the gun to her back in the next exercise, raising her hands before briefly grappling him, taking the weapon and sending in a flurry of knee shots.

She also filmed herself seeing off another man holding a pretend knife and, in a later story, held a decorated knife near her face.

Agapova said it had been “a pleasure as always” when the organizer thanked her for taking part, before UFC fighter Valerie Loureda, who frequently trains with her, added: “Oh my god. Let’s go.” 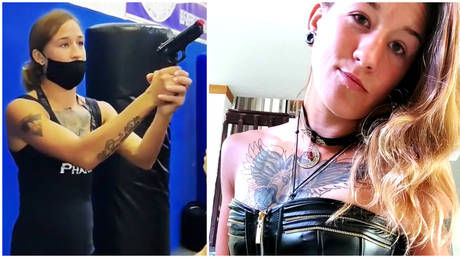