Could Khabib’s comeback be on ALREADY? UFC champ teases fans by holding belt as he announces DEC 10 press conference in Moscow

Could Khabib’s comeback be on ALREADY? UFC champ teases fans by holding belt as he announces DEC 10 press conference in Moscow

Russian UFC champion Khabib Nurmagomedov has sent social media into a frenzy by revealing that he will hold a press conference to announce his plans on Wednesday – fueling speculation that his retirement could be over already.

Lightweight king Nurmagomedov posed with a belt and stared into the camera for the promotional photo for the mysterious press conference in Moscow, when he is expected to make an announcement about his future.

UFC president Dana White has repeatedly insisted that he expects Nurmagomedov’s retirement from MMA to be temporary, although “The Eagle” recently told a group of young people that he was focused on his wide-ranging interests outside of the sport, including studying, agricultural and business investments.

Exactly a month after declaring his departure from the UFC, Nurmagomedov revealed on Tuesday that he had a meeting with White scheduled in their first discussion since he vanquished Justin Gaethje to defend his crown.

Nurmagomedov told fans that he was quitting in a highly emotional shock announcement following the fight, coming at the end of a turbulent year in which he lost his mentor, coach and father, Abdulmanap, to complications arising from the coronavirus.

“I had a goal to reach the summit and I got there,” Nurmagomedov told the youngsters. “Further, I have no competitive interest.”

White has said that he expects Nurmagomedov to at least extend his record to a perfect 30-fight streak, making the potential clash for the belt between ex-champions Conor McGregor and Dustin Poirier a non-title fight in January.

The Dagestani has also reportedly still been observing doping tests carried out among active fighters, stoking rumors that he could go back on his decision at any point.

Speaking just a week ago in the public appearance filmed by RT Sport, the 32-year-old flatly accepted that there would “always be rumors” about his return.

“Dana White or other promoters who could replace him will always want me to fight,” he sighed.

“It’s all about big money, views and media coverage, so I am sure they will keep chasing me.

“They always want the show to go on but I have no plans to continue fighting.”

White read from a list detailing Nurmagomedov’s vast global appeal at the start of the final press conference before UFC 254 in Abu Dhabi, demonstrating why he is desperate for the most feared name in the sport to resume action.

Nurmagomedov was in Abu Dhabi again on Friday, helping fellow Russian lightweight Islam Mamedov prepare for his fight with Martun Mezhlumyan at UAE Warriors 14 and providing a typically motivational message for his following of almost 26 million on Instagram.

“Training, flights, weight loss, competitive excitement and the whole process that we go through,” he wrote.

“In general, I want to say we do not lose focus.”

A litany of fighters have claimed they are keen to challenge Nurmagomedov should he return, including long-time antagonist Tony Ferguson, who has announced he will face Charles Oliveira at UFC 256 next month, and former Bellator champion Michael Chandler, who was the understudy for the bout with Gaethje.

Despite the presence of the belt in the photo and his possible negotiations with White in the last 72 hours, the press conference could just as feasibly be about one of Nurmagomedov’s high-profile new ventures.

Last week, Nurmagomedov revealed that he was stepping into the telecoms industry by launching a new operator, “Eagle Mobile”. 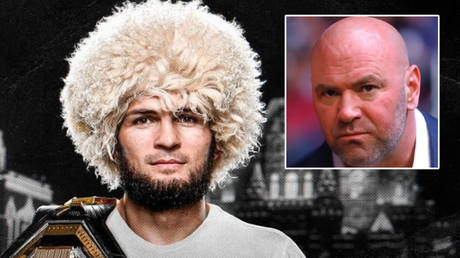