‘Could have just got Haaland’: Fans joke about ace after footage emerges of Chelsea chief Roman Abramovich’s new $605MN superyacht

‘Could have just got Haaland’: Fans joke about ace after footage emerges of Chelsea chief Roman Abramovich’s new $605MN superyacht

Fans have joked about Chelsea’s chances of making a mega-money raid for wonderkid Erling Haaland after seeing footage of Roman Abramovich’s reported newest investment – a staggering “superyacht” that is near completion in Germany.

Russian businessman Abramovich is already said to own the Eclipse, a behemoth which is thought to have cost $669 million.

That extravagance could now be eclipsed by the 460ft Solaris, touted as the most powerful yacht in the world and said to have been built in a facility larger than UK royal residency Buckingham Palace to include eight decks and a helicopter pad.

The Solaris is reportedly almost ready for sea trials after being built at the Lloyd Werft shipyard in Bremerhaven.

Abramovich is used to sinking huge amounts of money into German exports after splashing out more than $150 million last summer on Kai Havertz and Timo Werner, who were two of the brightest stars from football top flight the Bundesliga.

Midfield marvel Havertz is understood to have been laid low by Covid-19 during a difficult first season at Stamford Bridge, and striker Werner has been all at sea in a far cry from his prolific best.

That has led Chelsea fans to float the idea of another potential catch from the Bundesliga after seeing Abramovich’s huge boat – 20-year-old wonderkid Erling Haaland, who has scored 17 goals this season for Borussia Dortmund.

Roman Abramovich has a new yacht.

Who’s coming for the lockdown party on there? 😂 pic.twitter.com/M8UOJlDcT5

(Value according to Transfermarkt)

Could have just got Haaland instead of the yacht 😭

“Could have just got Haaland instead of this yacht,” said one fan, responding to another who had calculated that the juggernaut had cost Abramovich more than Werner, Havertz and several other first-team stars combined.

Abramovich will have plenty of room on his 48-cabin, 140-meter ship, accommodating an additional crew of 60 people and a traveling party of up to 36 passengers.

Roman sell the yacht and whatever else and get this fella 🔥 https://t.co/eKG2AEbvXk

Roman Abramovich spends £430million on a yacht i spend £2.30 on a coffee and still ask for a receipt..

Come to Chelsea, Roman has a yacht pic.twitter.com/P9pIEgT1xi

Chelsea were briefly rudderless last month when club legend Frank Lampard was sacked after steering his side to a poor run of results that threatened to leave their season shipwrecked.

Another German, Thomas Tuchel, has been riding the crest of a wave with an unbeaten run since succeeding him, although the new man at the helm will hope that their Champions League hopes do not run aground when they visit Atletico Madrid in the first leg of the round of 16 tonight. 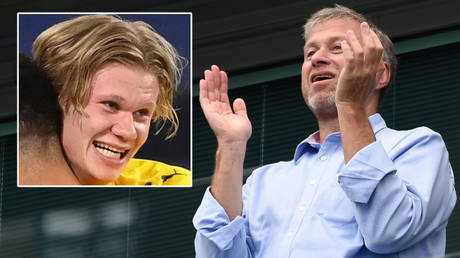