UFC light heavyweight champion Jon “Bones” Jones has been turning a negative into a positive, as he revealed that the nationwide COVID-19 lockdown has actually helped him get back on track following his DWI arrest in March.

Jones was arrested on March 26 after reports of gunfire in his home town of Albuquerque. Police officers discovered Jones in his Jeep, and the UFC star admitted that he had been drinking earlier in the evening.

After failing a sobriety test, Jones pled guilty to a DWI charge and was sentenced to one year’s probation and required to wear an electronic tag around his ankle as part of his house arrest terms.

Now the pound-for-pound MMA star, who is currently in the middle of a pay dispute with the UFC, says he’s using the restrictive measures during the coronavirus lockdown to put his life back on track again.

Speaking to Jackass star Steve-O on the stunt legend’s podcast, Jones explained that the restrictions are helping him to “detach from the nightlife” in his home town.

“The coronavirus really helped, though,” he explained.

“It helped me learn how to stay home on Fridays and Saturdays.

“Before the world got put on hold, I had this fear of missing out … and coronavirus helped me realize ‘Jon you’re not missing anything out there.’ And, anything that really matters is happening during the day time with your wife and kids.

“I’m trying to create a life of more substance outside the UFC.”

Jones is keen to get back into the octagon again, and has made public his wish to move up to heavyweight and face hard-hitting contender Francis Ngannou, but only if the price is right.

Unfortunately for Jones, he has been unable to broker a suitable deal with the UFC, who have stood firm despite Jones’ public criticisms of their approach to fighter pay.

Jones elaborated on the situation during the podcast, and said that he’d be prepared to be the sacrificial lamb for the rest of the fighters and hold out to make things better for the fighters that will follow him in the sport.

“If I have to have a bad relationship with Dana, sit out for two years, three years, to bring light to what’s happening, then these are the things people remember you for more than winning belts. (They’ll say) ‘That guy stood for the younger fighters.'” 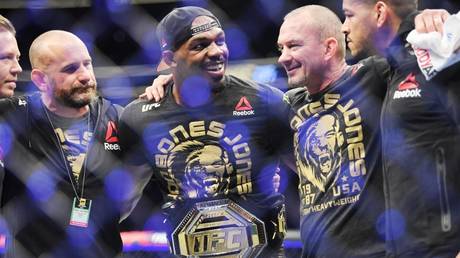