UFC welterweight “Platinum” Mike Perry has always been a controversial figure, and his latest utterings ahead of his co-main event fight at UFC Vegas 4 have continued that trend.

The Florida-based welterweight, whose hard-hitting style has made him must-see TV inside the cage, but his bizarre comments away from the cage have left many fans bemused, revealed he has undertaken a strange training camp for his fight with New Jersey’s Gall.

“I was in Lovett, Texas getting ready for this fight,” Perry told reporters during a media day video call.

“I did travel to Florida for a little bit. I watched a lot of episodes of ‘Naruto’. I watched the whole three seasons of the ‘Avatar The Airbender’. That was good for mental training.

“I walked around Universal Studios and Islands of Adventure. We went swimming in the Volcano Bay. That was good training. We ate at lots of restaurants. We ordered good, healthy food – lots of big steaks.”

In short, Perry’s approach was a far cry from the almost monastic approach of many of his UFC colleagues as they look to bring their weight down gradually for weigh-in day, then hit the physical peak for fight night.

In addition to his strange training camp movements, Perry’s only “coach” for the fight will be his girlfriend, who has no martial arts background.

“I feel like people just sound like Charlie Brown’s teacher in the corner,” he told MMA Junkie earlier in the week.

“They don’t even know what the f*ck to say because they wouldn’t go in there and do what the f*ck they’re talking about. I don’t really know how the coaching f*cking works. It doesn’t really matter.”

Despite having only his girlfriend in his corner, Perry is confident of success against Gall, and even promised to break the New Jersey native’s jaw during the fight as he sent a message to his opponent before fight night in Las Vegas.

“What can I say? I’m sure he’s trained hard. Good for you, bud. Y’all have a good life. Be healthy. Eat another salad. That’s not gonna fix your broken jaw that you get this Saturday, though.”

“It’s kind of an appropriate move. Not shocking. I don’t know what to make of it. I’m not putting too much stock into that, because it’s going to be a fight. It’s a fight and it’s me and him in there.

“I’m going to have a great corner of coaches. Real, legit coaches and he might not. But that doesn’t make a difference. It’s just going to be us in there.” 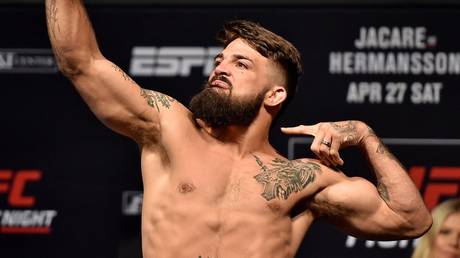