After some less-than-good-natured public negotiating between Conor McGregor and the UFC, it finally looks like the Irishman and the world’s leading MMA promotion are close to agreeing a deal for him to return to the octagon.

McGregor, whose “retirement” announcement was seemingly taken seriously by nobody other than UFC president Dana White, who continually informed reporters that the Irishman had retired from the sport, has tweeted to confirm that he has accepted a fight with old adversary Dustin Poirier, but with conditions.

McGregor and Poirier had initially appeared to go it alone as they publicly discussed on social media the possibility of facing off in a boxing match in Dublin, Ireland, with some of the proceeds set to go to Poirier’s charity, “The Good Fight Foundation.”

Following that news, the UFC has seemingly attempted to book the pair in a fully-fledged fight inside the octagon and, after Poirier tweeted a cordial “Hey @TheNotoriousMMA what’s up,” to the Irishman, McGregor responded to announce that he has agreed to face “The Diamond” in the UFC, as long as the fight takes place this year.

“I accepted the @ufc offer to fight you, but told them it must happen in 2020. I’m ready for Nov 21st, given that card’s recent injury issues, as well as any of the December dates, the 12th and the 19th. I’ll also still donate $500k to The Good Fight Foundation.”

Hello Dustin! I accepted the @ufc offer to fight you, but told them it must happen in 2020. I’m ready for Nov 21st, given that cards recent injury issues, as well as any of the December dates, the 12th and the 19th. I’ll also still donate the $500k to The Good Fight Foundation 🙏 https://t.co/23hN4AHtoI

Poirier responded with a message of positivity, and explained how McGregor’s $500,000 donation would be spent to help benefit the youth of Poirier’s home town of Lafayette, Louisiana.

“We’ll get it worked out! Good man,” he posted.

“We will use the donation to open a Boxing/MMA Academy on the side of town me and @dc_mma grew up where the tuition for the kids will be good grades.”

We’ll get it worked out! Good man, We will use the donation to open a Boxing/MMA Academy on the side of town me and @dc_mma grew up were the tuition for the kids will be good grades.🙏 https://t.co/gfy7lMUBtp

If signed, sealed and made official, the matchup would bring the pair together in a rematch of their featherweight matchup at UFC 178 back in September 2014.

At the time the pair had built a heated rivalry, led primarily by McGregor’s brash trash talk. Come fight night, the Irishman finished the American in 106 seconds via TKO to register his fourth win in the UFC and make good on his prediction of a first-round victory.

If their more recent social media exchanges are any guide, the rivalry between the pair has cooled significantly over the years, with more respect between the two fighters, who both now harbor ambitions of earning a rematch with all-conquering UFC lightweight champion Khabib Nurmagomedov in 2021.

The matchup, if booked, could become a de-facto number-one contender fight, with the winner moving on to take on the winner of the UFC 254 main event between Khabib and current interim champion Justin Gaethje.

It also received the seal of approval from former two-division UFC champion Daniel Cormier, who also hails from Lafayette.

He responded to McGregor’s tweet by posting, “This I appreciate, sounds like we got a fight boys!! And Conor still willing to give the money to Dustin’s charity. Awesome work McGregor!!! You’re the man!” 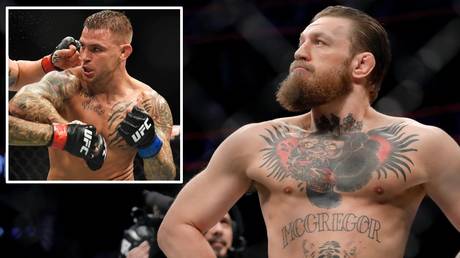 Northern leaders react with fury a...

‘She is not ready and doesn’t want...